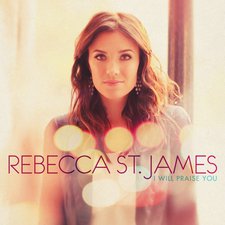 Rebecca St. James
I Will Praise You

Time away from it all can lead to rejuvenation. Music fans have already seen this fact in action with the likes of Living Sacrifice, Phillip LaRue, Charmaine and many others. After an almost six-year hiatus from the industry, Rebecca St. James is back in action with a worship album with much surprise attached; one could call it a comeback record of sorts. After fulfilling her hopes found in Transform's "Wait For Me" with her recent engagement, even more change is in store with I Will Praise You.

Worship God was St. James' first stab at a worship project, and for the most part, it was a triumph. Mixing together new and old favorites, plus a few originals thrown in, it accomplished what it set out to do. I Will Praise You and Worship God use the same approach, but it seems like a completely different record. The pop-rock leanings of her past are long gone as she opts for an adult contemporary approach. While the thought of St. James donning an AC sound could be a complete turn-off to many listeners, she adapts quite well. Many tracks benefit from the treatment, where a harder rock sound would not be as appropriate. It attempts to straddle the line between pleasing both her original fanbase and her radio listeners, and it successfully appeals to both crowds.

The title track immediately gives the listener an accurate impression of the rest of the album; with a fair amount of synthesizer and keyboard usage, it is far more a pop record of the 2010's than it is of even the decade before, distancing itself even from the sound of Worship God. With ten selections, St. James chose to work with less, but she makes the most of the tracks. A couple songs, namely "You Never Let Go" and "You Hold Me Now," feel a little too familiar for a comeback record, but she nails them nonetheless. "In A Moment" and "You Make Everything Beautiful" capture her musical prowess most effectively, and the bagpipes found in "The Kindness of Our God" are a clever change for the better.

Listeners familiar with St. James should remember her trademark vocal style - distinctly Australian in accent and with an unmistakable "squeak" at the end of most lines. This "squeak" was a quirk to some and an annoyance to others, but listeners could be surprised to find that it is mostly absent from I Will Praise You. In fact, along with the music, St. James' voice as a whole feels far more matured than previously heard; it is overall softer in tone, but picks up in intensity when the notes call for more power. One could argue that it is not as interesting as before, but it fits her new style like a glove.

It is still a little puzzling to see St. James opt for yet another worship album after years away from the scene, but this album is just the project she needs to steal the spotlight once again. Though her sound and voice sound very little like her past work, her abilities have developed suitably and the difference is an advantage more than anything else. It may not be exactly what her fans expected, but I Will Praise You is a glorious return to music for Rebecca St. James.

It's been a surprising six years since we last saw a new studio recording from Rebecca St. James. After launching a career in independent faith-based films and finding a first-time label home with Reunion/Beach Street Records (this will be her first album release not on Forefront Records since 1994), the newly-engaged St. James is returning to music with her second studio worship project, I Will Praise You. Nine years after her debut worship album, Worship God, I Will Praise You is unmistakably more grown up and mature in its sound and presentation (even all the way down to the photoshoot for this album). Comparatively to her previous studio album, the 2005 recording If I Had One Chance To Tell You Something, I Will Praise You doesn't even offer a hint of the rock sound Rebecca has often played with, opting more for a accessible pop base with electronic elements and an anthemic approach to much of the project. The title track is among the highlights with pounding drums and her signature soft lead and backing vocals. For fans of Rebecca or modern worship that doesn't entirely adhere to the usual formula, I Will Praise You is certainly a worthy reintroduction of St. James to the music world... and a worship project to stand out from the pack. Welcome back, Rebecca; you were missed. - John DiBiase, 2/7/11