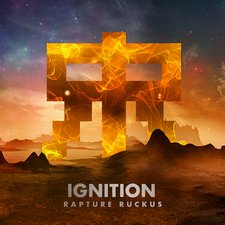 
Rapture Ruckus has been on the music scene since 2001, boasting a fun blend of hip-hop, rock, and pop with Christ-centered lyrics. Their big break came in 2009 when they got signed to BEC Recordings, elevating them from an underground hip-hop group based out of New Zealand to achieving global recognition. With their new release, Ignition EP, they are doing something a little different: a concept album. The five tracks present are inspired by the sci-fi novel Ignition by William Hawk, and the EP is being marketed as the soundtrack to this book. How this partnership came about is unclear, but whether it was a commissioned project by the book publisher or if there is some personal connection between the band and the author, it works.

Expanding on the anthemic hip-hop / pop/rock sound of their 2015 hit, "Volcano," the style really adds to the lyrical themes of the record. For example, "Fictional" is woven with an electric guitar riff that complements the nightmare-ish quality of the story. (Disclaimer: There is a surprising expletive on "Fictional," where Brad Dring raps "get your life together / get your a** into gear.") Most of the songs are about fighting or running away from some form of corrupted authority or evil forces. There are definite spiritual undertones, but their blunt approach to writing about faith and life, which is one of their greatest strengths, feels dialed back a bit here. There is, however, some great storytelling and songwriting, especially on songs like "Fictional" and "Proof Of Life."

While not necessarily their best project, it's arguably their most mature effort, probably due to the musical style and absence of Transformers references (among other funny pop culture references). Frontman Brad Dring has hinted at more new music to come soon, so this Ignition EP is a nice way to tide fans over until then.