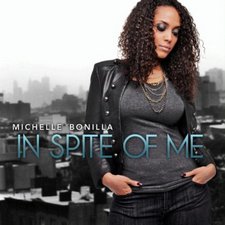 Michelle Bonilla
In Spite Of Me

Four years ago, Michelle Bonilla released her first album Phenomenal on Cross Movement Records, a debut that was met with much praise. Now she's back with her sophomore effort, In Spite Of Me, which released via RockSoul Records and showcases an urban style of CCM laid over some nice Latin infused production.

"The Show" begins the album by sending the listener some good R&B/club beats played behind positive lyrics about God being the center of our lives. The message is prevalent both in this track and throughout the entire album. Others songs like "I Love You," "You," and the title track keep the same feel musically and lyrically with the latter focusing on God's tremendous love for us. "Go Harder" is a unique Latin-infused fun track featuring the talents of gospel artist Chevelle Franklin. All of these songs are good listens and carry solid production.

Near the middle of the album, you'll notice some hip-hop flavor thrown in for good measure. "Our Generation" features Lecrae and Flame, and the trio blend together perfectly. This stand-out track has soft piano keys thrown in with nice hip-hop production laid over some good ol' rap lyrics about today's youth. "My Story" combines Michelle's soft vocals with the talents of R-Swift, and the result is yet another successful track.

The album does have some weaker spots, however. "I Am" and "That's What Love Is" showcase Michelle's vocal talents, but the tracks seem to be missing something. This absence of anything really intriguing or innovative may leave the listener wanting more. "Persevere" brings some diversity with a harder rock sound but comes out sounding disappointingly similar to a garage band. The bothersome chorus of "Give It Up" may cause some listeners to echo the sentiment regarding the song itself.

All in all, the good parts of the album heavily outweigh the handful of setbacks. If you're a fan of R&B who likes a mix of some nice influences thrown in or if you're just looking for some tunes to play at your next party, then I would highly recommend "In Spite Of Me." It seems to be one of the better R&B albums that has been released in the last year.