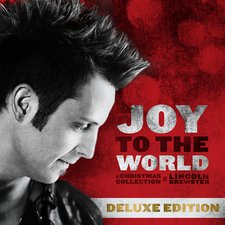 Given the fact that Lincoln Brewster had been making music, in one form or another, for some thirty years by the dawn of the current decade, it seems at least a little odd that he waited until last year to finally release a Christmas album. Of course, the purists in the crowd will be quick to point out that the his musical endeavors between 1983 and 1998 included stints with his high school jazz and marching bands, a slot as lead guitarist for former Journey singer Steve Perry, and connections with a series of club- and garage-based bands, including the Missing Links, which he started at the tender age of twelve with none other than his mom on bass. But while none of those groups admittedly bring to mind visions of snow, mistletoe and chestnuts roasting on an open fire, it bears noting that the talented Alaska native also honed his craft for nearly a decade and a half as a bona fide major-label worship artist before Joy to the World: A Christmas Collection finally saw the light of day during the 2012 holiday season.

As is the case with many a successful record, the now thirteen-month old project is now getting the deluxe edition treatment. In terms of all-new material, the expanded effort brings a pair of all-new songs to the table for 2013. Despite its somewhat slow start and a percussion track that sounds as if it could have been lifted from one of the early '80s Hooked on Classics albums, "Angels We Have Heard on High" eventually gets off and running in fine form, powered by a vitalizing volley of spirited vocals, a series of perfectly-placed fret runs and, of course, the cut's inherently hummable melody, which Brewster wisely chooses to alter very little. The instrumental rendition of "O Little Town of Bethlehem," on the other hand, is rendered far less enchanting, thanks to its somewhat aimless, and occasionally slightly rushed, melody, both of which offset a good portion of the song's innate intimacy and wind up rendering it less than thoroughly memorable.

The revised release also tacks on live versions of five tracks from the original record. To its credit, the in-concert material is blessed with a somewhat heightened sense of presence and vibrancy, due ostensibly to its arena-based setting, where Brewster flourishes. That said, with the slight exception of "Little Drummer Boy," which, like its studio complement, features a rapped interlude from KJ-52, the live cuts don't vary significantly enough from their studio counterparts to serve as sufficient enticements on their merit alone. Likewise, the inclusion of three bonus videos, the audio portions of which already appear twice on the project, is arguably an example of going to the well one too many times.

In its defense, Brewster's latest outing is both generous in length and, for the most part, fairly engaging. That said, as copious and mostly infectious as it certainly is, it nevertheless repeats far too much of its predecessor to recommend it to those who already own the 2012 album. Likewise, the expanded release, thanks to the fact that it features two, and in some instances, three, versions of several tracks, will likely seem a bit long in the tooth compared to the tighter, more succinct, and ultimately more enjoyable, original - even for those who didn't purchase that record last year. So, while the 2012 Joy is a first-rate effort most definitely worth investigating--particularly for existing fans, this year's model, like so many other expanded-editions, largely ends up being a case of too much of an otherwise good thing.