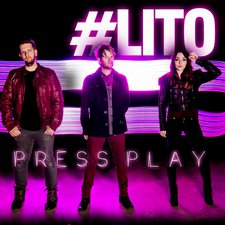 
To say that the band Press Play has had quite the musical journey would be an understatement. After having released three albums, and with the recent addition of vocalist Jonathan Thulin, it seemed like Press Play was on to something interesting. But after a series line-up changes, which included new vocalist Nicole Croteau filling in the shoes of Sada K. Jackson, does it have any impact on their 2013 release, #LITO?

#LITO (Love In The Open) is not entirely new territory for the band. It continues the trend of Electronic Dance Pop music that we saw on their previous record, World Anthem. "#LITO," "Force Of Nature," and "Wonder Struck" are definitely the higher points of the album, and are great examples of fun, EDM, Pop Dance songs that have heartfelt and meaningful lyrics. "Love Audio" and "Snap A Picture" follow the same trend, but aren't very deep lyrically, and may be repetitive to some listeners. "Android" may be one of the more aggressive songs on this album, and offers a great message on surrendering to God when you're at then end of your rope.

It's true that you can have too much of a good thing. The album delivers on the Electronic Dance Music, but there are times where the EDM may be overwhelming to the listener. When the album decides to slow down, that's where another problem lies. "Song For The Broken," "Top Of The World," and "I Can Breathe" have really heartfelt lyrics, but musically and vocally don't come together very well. Jonathan Thulin can make anything sound good, but new vocalist Nicole Croteau sounds like she's having trouble keeping up with him vocally, and Dave Hanley unfortunately resorts to relying on autotune for the majority of the album.

#LITO may have its awkward moments, but if you're looking for an album that delivers on fun, EDM, Pop Dance Music, this album has all that. It may not be for everyone, but to this listener, it is.