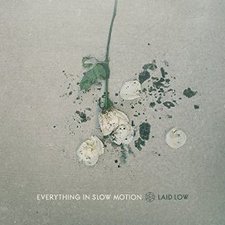 
While at first glance it can appear that Everything in Slow Motion has a relatively sparse discography, it's worth noting that EISM is largely a continuation of Hands, vocalist and songwriter Shane Ochsner's previous hard/metalcore band. Their first release since 2013's Phoenix, the new five track EP Laid Low is by far the band's softest offering to date. By no means is this indicative of a lessened quality, but EISM is decidedly attempting to branch out from their post-hardcore roots.

The EP opens up with "Coma," a rock piece which does a great job of laying the framework for the rest of the album. Although the lyrics are few, they find themselves perfectly placed and serve to set up several thematic aspects of Laid Low ("Take your time, I'll be here when you arrive / lose your pride, and leave it all behind / away I go through a door you've never closed / maybe I'm convinced it was you that asked for this / I hope you find what you're looking for"). The second track, "Bad Season," has an incredibly catchy chorus and guitar riff, but the five-minute song falls short of its buildup, leaving the impression of being somewhat unfinished.

The third track, "I Am Laid Low," starts off softly with some heavily filtered guitar work and Ochsner's signature whispered singing. This makes it all the more satisfying when he abruptly screams out, "It's not a problem if I keep it buried deep inside," hitting an impressively high note and initiating a dramatic turn on not only this piece, but the remainder of the EP. The fourth track, "Runaway," follows in similar suit, dealing with the topic of facing our struggles and owning up to sin ("I'll give you one, you give me two / I'll tell you lies, you speak the truth / sometimes it's hard to look you in the eyes / there's things I'll never confess; I'll never speak, so I'll run away / afraid the pieces will fit; I'll resist and run away").

It is quite possible that Laid Low's final song, "Capella," is also the best track on the album. Carrying with it an earthy and gritty atmosphere, the emotion poured into this piece will echo through almost any speaker. It's hard to discern who his words are directed at, but the emotion rings clear when Ochsner cries out, "I'm sorry I'm afraid to admit that I loved you so much / I can't stand the thought of failing you / it's not something we talk about; it's nothing that you said / it's a slowing in my heartbeat; it's a snake around my neck / so I'll leave this one here for you." After an ambient and beautifully melodic interlude, the album somberly closes with the line "I'm not much of a singer, but I'm giving you this song to help you remember me; remember when I'm gone."

While every song on Laid Low is very good, things somehow never quite come together in a cohesive manner. This EP more or less seems to be a random collection of experimental songs rather than a consolidated project. Regardless, the album's softer elements in no way detract from Laid Low's excellence, instead revealing EISM's potential to break into other genres should they continue on this path. "Coma," "I am Laid Low" and "Capella" are all tracks worth checking out, even if the post-hardcore scene isn't your cup of tea.