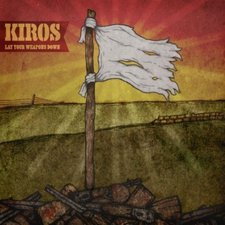 Kiros
Lay Your Weapons Down

Ain't No Grave Records (ANGR) is featuring their newest signee, KIROS, with their full-length debut, Lay Your Weapons Down. The pop-rock band seems to stick out like a sore thumb on a label dominated by harder rock and metal bands, but they feel more than at home with ANGR after releasing albums both independently and with Victory [Which honestly seems to be a better fit]. ANGR likens KIROS to bands like Three Days Grace and Saosin, but it seems that The Red Jumpsuit Apparatus and Panic at the Disco! are comparisons that are more appropriate stylistically.

Lay Your Weapons Down, a short ten-track album, is a three-part story. The drawback to this is that having only ten songs to develop the theme is difficult. After reading the lyric sheet it appears that "The Revolt" is represented by the first three tracks, "The Trenches" by the four middle tracks and "The Surrender" by the final three tracks. Overall, the album really falls short of the "three-part" hype built up by the label and has the same feel as any other release on all accounts. While it pains me to say about any band spreading the word of Christ, the album is lackluster as a whole.

Musically, there are some catchy songs and guitar riffs, but all in all, it is pretty bland. Lovers of the aforementioned bands, or someone like The Classic Crime in the Christian arena, may find some enjoyment in this record, but it falls short of those bands in sound. The vocals are another detractor. They can be described as average at best, and at times, the higher pitches in the vocal range can get a little annoying. MacKichan doesn't have a bad voice by any means, but it's far from the best when compared to similar bands.

The album's strongest point is in the soundly written lyrics. They are easy to sing along to and are glorifying to God. In "Good Intentions, Bad Directions" MacKichan proclaims, "Are we marching to our enemy's drum. Do we even know what we need rescue from? With our defenses down...," and in the chorus, "We've been sold out by our good intentions. We're just dreamers who've lost direction. We're no better than; we're no better than them." The worshipful lyrics, "You're the fire, you're the flame that burns inside this empty place; this hope, the remedy that's racing through my veins. You are my all always there to break the fall, and my rescuer when desperation calls" in "Desperation Calls" are also worth noting.

While the album is a far cry from perfect, "One Thing," "Good Intentions, Bad Directions," and the Dashboard Confessional sound of "Passing Through" are catchy and fairly solid songs worth checking out. Hopefully, a new home with a seemingly more secure future will bode well for this band. Maybe touring with major acts and focusing more on the product itself and less on who will release it will give KIROS what they need to grow and improve.