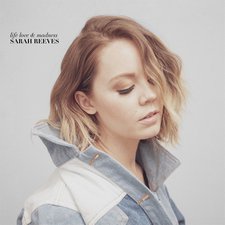 
Sarah Reeves is one of those names that seems vaguely familiar, but you're never quite sure if you've heard her music before. In fact, she's been around the industry since 2009 when she released her Sweet Sweet Sound EP. Since then, Reeves has had a smattering of releases and even switched labels. Now she is letting loose her latest project, Life Love & Madness, a 14-track pop music feast. The brand of pop Reeves is working with, though, is, well, moody.

This whole album feels like it has an underlying angst and uneasiness to it from the music to the lyrics to the production. It's not straight up songs about faith with simple lyrics ready for Air1 Radio. Such overt expressions are entirely absent and instead, as the title notes, love, life, and madness take center stage. Reeves' focus, this go-around, is not on spiritual heights but mundane valleys. This seems to be intentional and even intentionally controversial as songs like "Not My Style" and "Fuel to My Fire" show blatant defiance to expectations people have put on her. Other moodiness comes from songs in which Reeves struggles with how her life has changed in the past decade. Opener "2009" ruminates on this as well as other tracks, like the powerful "Anxious" or the Twenty One Pilots-esque "Motions."

Most of the moodiness, however, comes from the rest of the set, dealing with Reeves' relationship to her husband. There are a couple of upbeat tunes here, like the 2020-appropriate "Paradise" and the chill "Easy to Love." The other relationship songs speak of hard times. "Drive" is the first to give an indication that not all is well in paradise, though it balances its message with music Madonna would be proud of. The lowest point seems to come with "Don't Feel Like Fighting" when Reeves sings, "Another night we're sleeping separate/Anything we shouldn't say we said it/This bed never felt so cold." But even that track contains resolve to make things work. Other tracks like "Say the Word" and "When It Gets Good" also carry the same commitment, which is very refreshing in our time.

Sarah Reeves is certainly branching out and trying to redefine herself. She's exposing the messiness of life but offering a positive spin. She never gives much indication where hope can come from, but if you listen to her back catalogue you could connect the dots. The production is on par with mainstream pop artists, though Reeves' vocals get lost in the mix at times. A Christian can appreciate Reeves' zest and boldness for the new direction, but this reviewer never felt quite satisfied with the listening experience. Something always felt off or, as mentioned earlier, uneasy. That angst, mixed with the mostly upbeat pop tunes, created an album that, although good, feels uncomfortable. Maybe the music just doesn't fit the message for most of the tracks (it's on point for a few). Still, lovers of a solid pop album can join Reeves in her Life Love & Madness and dance along with a kindred spirit.