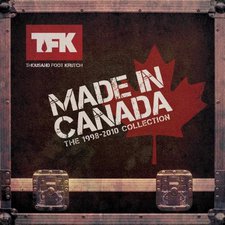 Thousand Foot Krutch
Made In Canada: The 1998-2010 Collection

In a world where digital outlets are the main source for music, it seems a little redundant for bands (or their former/current record labels) to release "Greatest Hits" albums. Coming off the heels of their successful The End Is Where We Begin, Thousand Foot Krutch's former label Tooth & Nail Records (in partnership with Capitol CMG) released Made In Canada, the band's first "Greatest Hits" album. Made in Canada spans over 12 years out of their lengthy 16-year career. The album kicks off with the title track from Phenomenon, their Tooth & Nail debut from 2003.

The tracklist does a fine job covering TFK's most well-known songs. However, I am surprised that "Puppet," "Supafly," or really any other song off of Set it Off did not make it onto this collection.

The two new songs, "Searchlight" and "Complicate You," are decent TFK tracks and sound like they could've fit on The Flame in All of Us or as bonus tracks to Welcome to the Masquerade. "Searchlight" is a song in the same musical vein as "Be Somebody," offering a slow tempo that leads into a mid-tempo rock chorus. "Complicate You" sounds like a hybrid of the funk-like sound of "Light Up the Sky" and the lyrics of "Boy Meets Girl (And Vice Versa)" by FM Static.

Made In Canada: The 1998-2010 Collection will be a great addition to an diehard TFK fan's collection, but I felt like it was a little lacking. I wish they would've put lesser-known songs, such as "My Own Enemy" from The Flame in All of Us," or "Faith, Love, and Happiness" from Phenomenon. All in all, though, if you're like me and you already own the songs off this album, pass this up. Other than "Searchlight" and "Complicate You," this collection is not worthy of purchase.