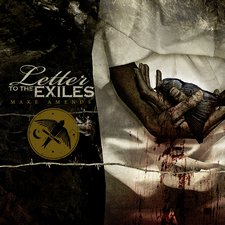 Letter To The Exiles
Make Amends

Letter to the Exiles are a group of metalheads who got their start on the independent label Harvest Earth Records in 2008. Two years later, they were picked up by Strike First Records and released a full-length album called The Shadow Line. The album was strong enough that they transitioned to Facedown for their third full-length album, Make Amends, and the band is still going strong.

Letter to the Exiles fits perfectly on Facedown; they're one of those bands that comes in and hits the listener hard with some blast beats and chugging guitars, but they're also skilled enough to experiment with their music, successfully avoiding creating a mundane, paint-by-numbers hardcore album. Take, for instance, "Conversations With Fallen Saints," which contains an instrumental bridge with a guitar solo the likes of which could be found on a Living Sacrifice or Demon Hunter album. The following track, "Retribution," has a midsection akin to an indie rock band like My Epic. Later, the same portion gets played again, but with a heavier emphasis on the double bass. One of my favorite sections of Make Amends is the opening of "The Violence of Our Kind." The first forty seconds or so features rapid-fire instrumentation, with Chris King's emphatic screaming to top it off. It's great to see that bands like Letter to the Exiles are capable of maintaining contrasting sides of their personality in their music while making an effective album out of it.

On a similar note, we get a taste of some dual vocal action here. The main vocals come from Chris King, who proves to be a worthy screamer. Though he's not too easily distinguishable from other screamers in similar-sounding bands, he's got some solid pipes. The band's guitarist, Mark Randazzo, provides the clean vocals. But while Randazzo is also a strong vocalist for the context, he tends to sound a little generic, like a great deal of modern rock vocalists. Hints of John Cooper (Skillet) influence are present, with some subtle Mike Barnes (Red) influence as well in tracks like "Open Graves." Despite the blandness Randazzo tends to carry, it's a good balance when compared to King's harsher vocals. And the two sound pretty good together in the lighter song "A World of Wicked Men" ("lighter" only in the sense that it's less of a hardcore song and a lot more modern rock).

Though this is the band's third album, Letter to the Exiles are still a relatively new band, with what seems like a bright future ahead of them. Make Amends is a solid hardcore album that shows great potential and at the same time adds to Facedown's goal to be "more than sound" with lyrics that not only focus on life in general, but on God as the source and purpose of that life. There's been a lot of good hardcore to soak in so far this year, but make sure you don't skip over Letter to the Exiles.