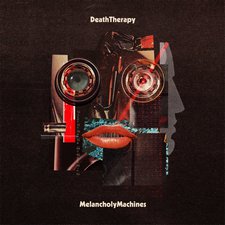 
Last year forced musical artists to scramble to supplement incomes that the Covid pandemic took from them. For some, it meant finding "normal" jobs. For folks like Jason Wisdom, it simply meant making more music. He started taking pre-orders for two brand new Death Therapy EPs, the first of which, Dance Therapy, came last summer. The second of which, though, has grown into the band's official third album, which is being released courtesy of Tooth & Nail Records.

The sidestep from Solid State to Tooth & Nail might be surprising to some, considering Wisdom's penchant for heavier music. But you'll quickly find that Melancholy Machines is a different beast altogether, while also still being uniquely Death Therapy through and through. Much of the first half of the album sounds like a continuation of Voices, but with less metal elements and a lot more hard rock and nu metal. Lead single "Tension" features a low key, jazzy drum beat and really catchy horns in the chorus. The almost growly vocals and quiet drums in the verses really remind me of "Song X" by East West. The album also features one of the most toned-down Death Therapy tracks yet in "The Silence of God." Featuring a rather surprising guest spot from Dawn Michele of Fireflight, the Andrew Peterson cover almost sounds out of place on the album with its slower, more tender sound, but it's orchestrated and performed with reverence for both the original song as well as the subject matter. "It's enough to drive a man crazy, it'll break a man's faith / It's enough to make him wonder if he's ever been sane / When he's bleating for comfort from Thy staff and Thy rod / And the heavens' only answer is the silence of God." I, and surely a lot more Christians who wouldn't want to admit it, have experienced this. It's a great cover and a great song that is equal parts sympathetic and encouraging.

For me, the album's back half is the stronger half. The front half has some interesting moments, such as some of the creepier electronics in "Bad Day To Die." But it also has my least favorite Death Therapy song yet, "Flammable Animals" (the verses' vocal melody is rather unappealing). But from "Bullet Holes" to "Melancholy Machines," we get some of the album's best instrumentation and songwriting. "Ghost Psalm" is an instrumental track that maybe isn't quite as memorable as "The Instability of Proto Man" or "The Belmont Family Curse," but it is just as enjoyable. The Rob Zombie-like "Bullet Holes" is my favorite of the original tracks here. Not only do I like the infectious groove and the rocking chorus, I also like the way Wisdom touches on mass shootings and how it seems like we're doing nothing to stop them ("The blood runs out without making a sound / the blood cries out, it cries out from the ground / all you've got are Band-Aids for all of these bullet holes / stop the madness, stop the madness").

You never really know what you're going to get from Death Therapy. And while the stylistic changes and departures might be enough to lose some people (or make the Becoming the Archetype fans upset), I personally have been enjoying the ride Jason Wisdom has taken me on. Both the Christian music scene and the heavy music scene could use a little creativity these days. Melancholy Machines isn't my favorite Death Therapy album, but it's a solid entry in the discography, and it's enough to maintain my interest in what they're gonna do next.