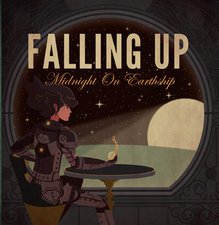 Falling Up
Midnight on Earthship

Although the album has the most obvious spiritual references since the band's first album, Crashings, those hoping for heavier rock elements will be disappointed. That's too bad, since Ribordy proved he could write strong, Biblically based lyrics in the context of rock music. Still, there is a lot to like on the album. The project is mostly acoustic with sprinkles of techno sounds designed to enhance its dreamy ambiance.

Those familiar with Ribordy's side project, the Gloom Catcher, will notice the similarities in "Rooftops" and "Sky Circles." Ribordy infuses a lot of emotion in the stellar refrains of both the echoic "Voices" and "Bruise" with his vocals. In fact, several songs sound too bland in the first stanza before the tune kicks into gear. "Down Here" might be the most powerful track with its infectious chorus and guest background vocals. The piano driven "Home" is also a nice addition to the album.

Ribordy called Midnight on Earthship less of a worship album and more of an inspirational one. The label fits since there is still a lot of ambiguity surrounding the lyrics, but, at least, you can piece things together. "Sky Circles'" reminds us of God's love for us and our value to him ("But every broken heart is a glowing light/He will find it out in the darkness/Every lonely song is a brilliant sound/He will hear it out from a distance"). The band mentions Jesus by name in "Tomorrows" ("Oh Lord Jesus/I'm still trying/Wait for me"), and "Home" contains themes from the parable of the Prodigal Son.

The album is dripping with emotion, but Midnight on Earthship seems like it didn't receive as much creativity as Hours. Still, there is more than enough musical depth on the project to keep the listener's attention for multiple spins. Similar to Your Sparkling Death Cometh, the lyrics offer fans a nice mix of clear themes and intricate concepts worth exploring. Overall, those who have enjoyed Ribordy's endeavors in the past will enjoy Midnight on Earthship, and fans from every Falling Up release should give it a listen.