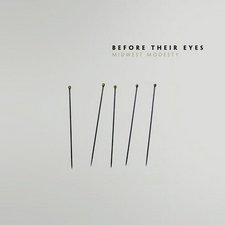 Before Their Eyes
Midwest Modesty


Rumors have been circulating that Before Their Eyes is calling it quits. If this is indeed true, this final album will definitely have BTE going out with a bang, but will also leave many adoring fans saddened. So what does Midwest Modesty have in store? Simply put, it's an album that all current BTE fans and hard rock lovers will deeply appreciate.

"It's Dark Inside Of You" and "The Positive And Negative Of Being Alone" start off this album, and it is exactly what fans recall from the boys from Findlay, Ohio: heavy rock tunes with stellar singing and throat-ripping screams making for superb songs. Up next is "We Won't Make the Same Mistake Again," which features Hotel Books in an uber emo-driven track about life's struggles. Cam Smith is unique to say the least and he beautifully leaves his mark of lyrical genius with the words, "I learned that you could choose why you hurt. Or you can let the world hurt you while you do nothing. The moment of that decision will change everything." The combo of Nick and Cam on this collaboration is a work of art. "How It Feels To Be Defeated" comes up next, giving a nice softer reprieve from the intensity thus far.

Craig Owens helped to produce and co-write this album and his creative fingerprints can be found all over this album, especially in one liners such as "We all know that oh, you've got nothing to say and all you do is talk" from "Anything's Possible In New Jersey" and "If for the rest of your life, you decide to never think about me. Don't expect me to care, drawing pictures on the walls all crazy," from the title track. As one person said, the level of craziness is on point. The lyrical content here and throughout Midwest Modesty are superb and combined with the way that BTE still delivers an amazing post-hardcore sound, one can't help but dig this album.

Other solid tracks would be "A Home With No Ceilings" and "Adam Was A Cool Dude," while "We Destroyed All The Evidence" is probably my favorite listen on the entire album. The thumping drums and guitar shreds compiled with gut-wrenching screams, paired with Nick's high-pitched vocals, make for a great overall album. While there are only nine songs (I'm not counting "Noise" as an actual song), this is an album I will be blasting for a long time to come. I just hope this isn't the end of an era for a heavily under appreciated band.