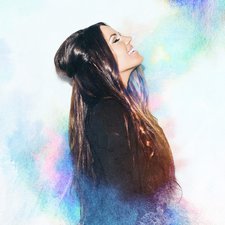 
Back in 2014, Beckah Shae released her album Champion, which featured bold pop beats with an electronic dance sound and included several collaborations with other well-known Christian artists. Despite charting well on three Billboard charts and receiving positive reviews from critics, Shae still managed to stay slightly under the radar, even within the CCM scene. Music has changed a bit since then, with dubstep on its way out and retro sounds from the 50's and 60's sneaking back onto mainstream radio. Shae's own sound has always been current, but instead of playing it safe and doing another electronic pop record, she decided to branch out and take some creative risks with her latest album, the crowd-funded Mighty.

Shae's husband, Jack Shocklee, is back at the helm handling production, but this album sounds nothing like her previous works. In fact, Mighty sounds very similar to mainstream doo-wop crooner Meghan Trainor's first album, Title. Thankfully, Shae's voice is very compatible with this genre, and the production values on Mighty surpass past efforts. The sounds on Mighty range from motown to jazz to Gospel to pop, and feature a wide array of instruments you wouldn't normally hear on a Beckah Shae album, namely the organ, trumpet, and tambourine. In her Kickstarter campaign video for this album, Shae stated that she wants to impart a message of hope on this record. Indeed, each track on this album is brimming with encouragement, and those in dire need of a pick-me-up will certainly enjoy it.

The album starts strong with the fierce title track, "Mighty." Shae's soulful voice glides over the frantic piano and bouncy beats, proclaiming the awe-inspiring power and greatness of God. After "Mighty," the pace slightly slows down with three mid-tempo tracks, "Source of Life," "It's Well," and "Hold On." "Source of Life" features a jaunty New Orleans jazz sound, while "It's Well" is a lively take on the well-known hymn, "It Is Well With My Soul," featuring hand-claps and gang vocals. "It's Well" transitions seamlessly into "Hold On," which opens simply with a bassline and finger snaps in the background, before slowly adding more sonic elements until the song is in full swing. The song is an anthem for those who are weary, reminding them that God has great plans for our lives and we have to rely on His strength to keep pushing forward.

"I'll Be Alright," the album's lead single, is an up-tempo song Shae wrote for a relative dealing with intense vision problems. This ridiculously catchy tune brings the energy back up, and Shae almost wanders into rap territory as she quickly whips through the bridge "...Better, bigger, stronger / You are higher, greater, wiser / I know if you're on my side / I'ma, I'ma be alright!"

"Wolves" is the standout track from the rest of the pack (no pun intended) and brings the album's sound into more contemporary territory. The intro features a sneaky minor-key bassline that reinforces the message of the song--beware of the tactics and people our enemy will use to tear us down. This song also refers to several scriptures, especially the warning in Matthew 10:16, "I am sending you out like sheep among wolves. Therefore be as shrewd as snakes and as innocent as doves."

"See Ya Soon" is a cheerful tune about the eternity that awaits us as we endure these troubled times, and it brings us back into the past with a doo-wop sound. It segues nicely into "Hope Lives," the album's sole ballad and final track which sends Mighty off on an optimistic note: "So don't you forget, it's not over yet / There's still tomorrow right up ahead...Hope lives so breathe it in."

Overall, Mighty is a well-crafted album with a groovy throwback sound which is rare to find in the CCM scene. While I was disappointed with the brevity of this long-anticipated album (only 8 full tracks and a 22-second outro), I am happy to say that there is no filler to be found here. If you're "all about that bass" but prefer more inspiring lyrics, look no further than Beckah Shae's Mighty.