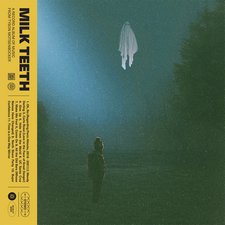 
I have a working theory that anyone can learn to like any music, as long as two factors are at play: one, a willingness to like the music in question, and two, that the music contains melodic and/or rhythmic elements to latch onto. It seems that, once a listener is capable of physically joining in with a song, most commonly through dancing or singing, this activity can override whatever established opinions are held about the music. Whenever I hear "Don't Stop Believing" or "Mr. Brightside," I can easily fold my arms in contempt, but if I instead choose to sing along, the emotional thrill of participating washes away whatever cultural or critical complaints I would otherwise use to protest the songs. I share that theory because, as you may have guessed, this is where I'm at with Milk Teeth, Tyson Motsenbocker's third full-length album with Tooth & Nail Records. I've had trouble nailing down just how "good" I think this album is (from a critical perspective), yet I've listened to the album so many times through the process of writing this review that I've come to enjoy it quite a bit. I'm singing along to the choruses, humming along to the guitar riffs, and developing a fond sense of comfort within this weird set of summer-y, indie beach tunes. Yet what continues to throw me off is that Milk Teeth's greatest strengths could also be construed as its most glaring weaknesses.

While the hooks are quaint and the melodies simple, Tyson's writing and range make all of his songs effortlessly singable, with a non-showy, everyman voice that could almost make him the "Brandon Heath of indie rock." However, the extremely on-the-nose details and metaphors in his lyrics can morph a sing-along into an awkward endeavor; and this is often due to the frequency by which he utilizes highly specific references. In "Hide From the World" alone, you'll hear mentions of Harry Potter, Peanuts, Sesame Street, and Mary Poppins. There's a chance that this song is saying something about how we use these franchises and entertainment sources as a way to "hide from the world," but that's an interpretative leap that isn't necessitated by the lyrics, nor does it match the song's chipper, flippant tone. During other songs, you'll hear references to LEGO toys, the novel A Christmas Carol, the movie Shawshank Redemption, the TV series Magnum P.I., the video game Chrono Trigger, and more, not to mention particular colleges, locations, car models, beverage brands, and (presumably) the names of people in Motsenbocker's life. I imagine that the reactions to such cultural specificity will range broadly from listener to listener, as some fans will relate to these details more than others, while some may appreciate all the concrete images and examples as a refreshing change of pace from a music industry that is overflowing with lyrical vagueisms and abstractions. Personally, my reactions differ slightly from song to song. On "Wendy Darling," the excessive details serve the song extremely well; elsewhere, I find this trait to be distracting and occasionally cloying.

Milk Teeth's strongest asset is its tight, controlled sense of purpose and theme. The album builds upon its themes and ideas across its eleven songs in a manner that's clear and concise, resulting in a message that's ultimately about change: grappling with the inevitably of change as time moves forward. Motsenbocker is wrestling with the things he wishes he could change, as well as the things he wishes wouldn't have changed. My favorite song on the album, "Give Up," is a heartrending portrait of a relationship that should've never started, yet which the narrator didn't want to end: a romance where the man was able to convince the woman to love him, which was doomed to last only as long as she was able to keep up the facade. ("Give Up" also contains my favorite musical passage on the album, with its dual guitar lick that follows the first chorus, not to mention some clever bass guitar work in the first verse that teases the chorus hook.) Other similar anecdotes -- oscillating between optimistically rosy-eyed and pessimistically mournful lenses of nostalgia -- reach their pinnacle on the semi-epic climax, "Time is a One-Way Mirror," where Mostenbocker laments the one-sided relationship he has with his past and with time itself. The song isn't as musically momentous as it perhaps wants to be, and combined with the penultimate "Buyer Confidence" (both of which are six-minute-long tracks), the album loses much of its momentum. But from a lyrical perspective, they paint a haunting portrait of how painful and pointless it can be to live in our pasts: a mistake which makes it all the more difficult to create a better, brighter future.

Milk Teeth contains fragments of a masterwork, and I know that there are fans of this album who believe that the pieces do in fact add up to a full-blown masterpiece. Unfortunately, what I see is a collection of cohesive compositions that sometimes hit the ball out of the park ("Give Up," "North Shore Party"), yet which are mostly fascinating, enjoyable misfires. Naturally, part of this will come down to musical preferences; people who love retro-rock like Talkie or the current trend of fuzzed-up 90's garage-alternative (à la Switchfoot's interrobang) are more likely to adore this album, despite the ways that it can sound samey from track to track. Another element is the album's relatability; the more you have in common with Motsenbocker's experiences and cultural touchpoints, the more that these lyrics will ring true, without you needing to Google a reference in order to understand them. (Who knows, would I love "Hide from the World" if I'd grown up watching It's the Great Pumpkin, Charlie Brown every year and reading The Deathly Hallows immediately upon publication?) Surely, there's another contingent of listeners who miss the vibe of a guy and his acoustic guitar who used comedy to gently critique the church, such as when the punchline in "Sunday Morning" absolutely slayed the big crowds when Mostenbocker opened for Switchfoot on tour in early 2019. Altogether, I imagine fans will fall into one of three camps: those who think Motsenbocker's best is behind him, those who see Milk Teeth as his masterpiece, and those (like me) who acknowledge the potential and evolution here but believe his best work lies further ahead.