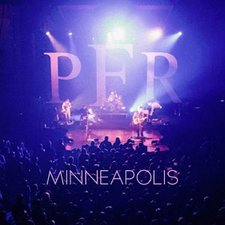 The live album is oftentimes a concept that looks better on paper than executed in reality. The reason for this is usually that there isn't as much replay value for a live album as the usual studio album offers. However, when a live album plays out like a modernized hits collection for an artist, the results can be considerably better than the rounding up of studio tracks that vary from eleven to twenty years old. In the case of PFR's debut live album, Minneapolis, the project commemorates the band's twenty years since their debut studio release and celebrates one of Christian music's top acts from the 90's.

A year ago, in January 2012, PFR reunited in their home state of Minnesota to perform a plugged-in, full-length show to a packed house of fans. The band has been mostly inactive since the release of their ironically-titled 2001 reunion album, Disappear, and has only popped up a few times since then to record a low-budget update of their classics for Family Christians Stores exclusively (The Bookhouse Recordings, 2004) and a few live shows here and there, including some acoustic webcasts in late 2011. But for the majority of the band's fans, if you weren't in Minneapolis for this specific show or really in tune with Internet chatter to find out about the webcasts, you weren't likely to even know they were moderately active once again. However, with the pop rock trio gearing up for more special live shows in the future, a recording like Minneapolis couldn't have come at a better time.

Minneapolis is thirteen tracks that contain favorites from throughout the band's career, with only tracks from their memorable The Late Great PFR not represented here. The bulk of the songs selected for the show are from the band's first three albums (Pray For Rain, Goldie's Last Day, Great Lengths), with one from their "final" album in 1996, Them ("Anything") and two from their 2001 release, Disappear ("Falling," "Amsterdam"). To round out the track listing to a baker's dozen is their cover of The Beatles' "We Can Work It Out," which appeared on the 1996 tribute project, Come Together: America Salutes the Beatles. As a sampler of some of the band's best, Minneapolis is a fan's dream come true. While a good chunk of these songs are familiar ones to hear live, a song like "Anything" was from an album that the band never officially toured for, and "Amsterdam" was not one of the two live tracks from Disappear that was also a Family Christian exclusive when the retail chain released that album ("Falling," which was played here, was one of those two bonus tracks). If you're unfamiliar with PFR, this is an excellent way to get acquainted through its modern production and arrangements. The band keeps the songs true to their original compositions, but it's great to hear them without, for example, a dated 90's sound.

The actual sound quality of the live album may be my only real gripe about Minneapolis. While some live albums sound TOO clean to the point of not even sounding live at all, some live albums have much more of a bootleg quality. Given that these guys probably don't have access to top-of-the-line live recording equipment (and that's okay), Minneapolis still sounds pretty dang good (as opposed to the recent Anberlin live recording, Live from House of Blues Anaheim, which did not). If anything, Minneapolis has more of an old-school live feel. It sounds more like you're in the audience listening along than on stage with the band. But that alone has a special feel to it. Another thing to consider is that this is a band of brothers who no longer tour regularly or play together on a regular basis. These are seasoned musicians who went on to perform solo or with other bands after PFR disbanded, and they reunite almost flawlessly for Minneapolis. Only on rare occasion may a note be missed ("Goldie's Last Day") which sparks a sheepish laugh from the band, reminding you that PFR isn't the same tight band they were when they were recording regularly and touring heavily (and, in all fairness, it wasn't something they fixed in post production like many artists do these days, keeping this a true capturing of a live experience). Still, the fact that it's otherwise not a noticeable thing says something for their musicianship and how naturally well these boys play together.

Minneapolis may not be the live album fans have been waiting for since this trio's humble-yet-fantastic beginnings but it's close to it, being a recording that's been twenty years coming and one that any fan of PFR will find a delight to revisit. The usual band banter has been cut out almost entirely which aids in the replay value of the album, and hearing such songs as "The Grace of God," "Merry Go Round," "That Kind of Love" and "Wonder Why" (oh, not to mention the blaring rock number "Last Breath," the Beatles-esque "Great Lengths" and the worshipful "Anything"), make Minneapolis an absolute delight. Here's hoping that 2013 will see new and exciting things from three incredible musicians that ought not to be forgotten any time soon.