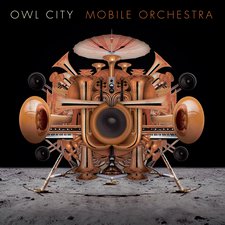 
Owl City has single-handedly changed the landscape of pop music over the years, consistently putting out some of the best music the genre has these days. Even when The Midsummer Station came out and fell a little short of expectations, he was still doing pop music better than most modern artists. Last year's Ultraviolet EP was no exception, nor is his fourth national full-length album, Mobile Orchestra. Full of catchy tunes and lots of surprises, 2015's musical offerings are getting a little bit sweeter this summer.

Admittedly, while I really enjoy this album, it has its fair share of misses; the opening song is one of them. The current single, "Verge," gets us started with an upbeat groove, and it even starts with guest vocalist Aloe Blacc (who you might know from Avicii's big 2013 single "Wake Me Up"). The song is fun and danceable, but overall it feels empty and repetitive, like one big chorus over and over again. "Bird With A Broken Wing," while a stronger offering than "Verge," has kind of a strange structure. The verses almost seem like they were all originally supposed to be the song's bridge, but some rewriting morphed them into verses. It's hard to explain exactly why it seems this way, and it's probably not correct, but hopefully it will make sense when you listen to the song. Additionally, the country song "Back Home" and the album's closer, "This Isn't The End" (which also closed Ultraviolet) are rather weak tracks, though they're both still fairly enjoyable.

The rest of the tracklist is a bit of a mixed bag. Not to stir up a debate here, but there's a stigma of "old" Owl City versus "new" Owl City. "Old" Owl City was abstract, dreamy, lush, and full of sometimes-confusing metaphors; "new" Owl City is much, much less of that, and a lot more radio-friendly and accessible. Mobile Orchestra seems to strike a decent balance between the two, leaning more toward "new" Owl City, but not quite as much as The Midsummer Station. "I Found Love" is perhaps the closest thing we get to Ocean Eyes; set to music along the same pace as something like "Vanilla Twilight," Adam Young delicately sings about God's love: "So lead me home and lift me up above the stars and even higher, I'm not afraid because Your love, it falls like rain and burns like fire."

Regardless of your preference between "old" and "new" Owl City, there are definite gems on Mobile Orchestra. "Unbelievable" may end up being this reviewer's personal favorite, if only for the fact that it uses the power of nostalgia (and puns) to win its audience over. First of all, it features Hanson - yes, the same Hanson that melted your mind with "MMMBop" in the 90s. Secondly, it's all about the 90s. Young sings, "When I was a kid I ate Spaghettios, played laser tag and G.I. Joe, and if you vowed 'no girls allowed,' then you could join the club, when I was a kid I spent my Saturdays blowing on Nintendo games, the newest thing was Lion King, and I could feel the love." One of the Hanson brothers also gives us a knee-slapper: "When I was a kid I still had VHS, watched Fresh Prince and Jazzy Jeff, Zach Morris owned the first cell phone, it was off the hook." Oddly enough, "Unbelievable" reminds me an awful lot of The Midsummer Station's "Good Time," but rest assured, this is a much better time. "Thunderstruck" - which is NOT an AC/DC cover - is a solid dance pop piece that's vaguely about the love of God, and both "My Everything" and "You're Not Alone" are both decent songs that are also made-for-radio. The last two feature the most outspoken Christian lyrics of any officially-released Owl City material yet; the latter of these even features Christian pop sensation Britt Nicole. They sound like radio songs, and they're very straightforward lyrically, but Owl City does well with it.

In the end, Owl City's latest effort is another solid pop album to add to his discography and your record collection. Adam Young is a truly remarkable artist in today's pop scene; if the scene is the rough, then Mobile Orchestra is a big, fat, shiny diamond. Exploring a plethora of different genres and topics, it has something for almost everyone. It's far different than Ocean Eyes and All Things Bright and Beautiful, but that's okay. It's still worth your time if you've ever been a fan of Young and his endeavors.

- Preview Review date: 5/16/15; Review date: 6/30/15, written by Scott Fryberger of Jesusfreakhideout.com class="coversize" align=right> Early Thoughts...
From obscurity to superstardom in the last decade, Owl City has become a household name. Though his last full-length album, The Midsummer Station was divisive between longtime fans and new fans, his music has consistently been some of the best to grace pop music radio playlists. Just as the Shooting Star EP foreshadowed The Midsummer Station, 2014's Ultraviolet EP foreshadowed Owl City's fourth full-length album, Mobile Orchestra. Not as dreamy or abstract as his first two albums (or his Sky Sailing album, at that), Mobile Orchestra is the best thing Adam Young has released in the last four years. It's also the most diverse, as it features not only songs fit for pop radio ("Thunderstruck," "Unbelievable"), but a couple worship songs as well ("My Everything," "You're Not Alone"), and even one song that could almost make it onto country stations ("Back Home"), thanks in part to country singer Jake Owen making an appearance. With other songs featuring vocals from Aloe Blacc, Britt Nicole, and even Hanson (yes, that Hanson), Mobile Orchestra is a pop album we can actually look forward to... - Preview Review date: 5/16/15, written by Scott Fryberger of Jesusfreakhideout.com --->

Despite the fourteen month turnaround from Owl City's sophomore album (All Things Bright And Beautiful) to his third album (Midsummer Station), it's been three years since his last release. Now his fourth effort, Mobile Orchestra, has arrived, it looks and sounds more like an Owl City team-up project. Some of the collaborations really work, especially with Sarah Russel in "Thunderstruck" and Jake Owen in "Back Home." Despite his country origins, Owen fits right in with the electronic-fuzed pop song, but Aloe Blacc's appearance on "Verge" does not quite click. On the five cuts where Adam Young sings alone, the album remains strong, if not novel. There's no denying his formula of catchy techno pop works, but Mobile Orchestra doesn't offer anything from Owl City we haven't heard before. "This Isn't The End" stands out because of its simplistic pop approach combined with its emotional and hopeful handling of issues like abandonment and suicide. Lyrically, the rest of the album doesn't have the wit or creativity that, in part, made his first two albums so good. It's encouraging to see the two worship-esque songs, "My Everything" and "You're Not Alone," are good entries that both avoid sounding cheesy. Mobile Orchestra is easily a step up from Midsummer Station, but it's still not as fun or memorable as his first two projects. That being said, Owl City fans and pop fans alike will get some decent mileage out of Adam Young's latest catchy album that covers plenty of faith and hope. - Review date: 5/9/15, written by Nathaniel Schexnayder of Jesusfreakhideout.com

After half a decade of struggling to find his appropriate fit in the music industry, Mobile Orchestra seems like a good indication of where we can see Owl City's sound for the foreseeable future, and if that is the case, I have no problem getting behind this approach. It is synthy and dreamy enough to appeal to those who only love Ocean Eyes from Adam Young's catalogue, has enough pop-sensibilities, beats, and guest appearances to attract more mainstream audiences, and includes unmistakably direct references to Young's faith for the first time on any of his national releases to firmly establish himself as a presence in the Christian music industry. We may never see another platinum-selling album, mega-hit single, or collection of beautiful (if not a tad indulgent) lyrical metaphors and imagery from Owl City, but Young proves with Mobile Orchestra that he can craft a very good pop album without needing to do any of those things. - 7/9/15, Mark Rice of Jesusfreakhideout.com

After achieving what can only be described as total and complete mainstream success, Owl City has progressively morphed towards a more contemporary sound. While The Midsummer Station was received by critics and fans with mediocrity, Mobile Orchestra builds on the strengths of its predecessor, offering a significant improvement. Lyrically, Adam Young's faith is unabashedly put on display, perhaps more so than any prior Owl City release. A handful of songs stand out, including the introspective "My Everything" and more upbeat "Unbelievable" (featuring Hanson), reminiscent of last decade's work. Even as a complete detester of all things "country," I thoroughly enjoyed listening to "Back Home," featuring Jake Owen. Ultimately, the album's quality is slightly above average, but still falls short of the underlying talent. - 7/9/15, David Craft of Jesusfreakhideout.com