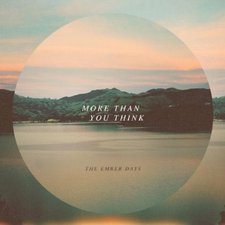 The Ember Days
More Than You Think

Among the Come&Live! roster of artists, The Ember Days are one of the most endearing and passionate, with high expectations surrounding each new release. If I could only use one word to describe their music, it would be "intimate," but that would serve as an understatement. Their last venture, in the summer of 2011, was a moody indie album called Emergency that took the worshippers into new musical territory with an ever-so-slightly darker and more desperate tone. As 2013 begins, The Ember Days are getting the new year in music started with their third full-length album, More Than You Think.

One thing that makes More Than You Think different than previous albums (in a very minor way) is a lack of Jason Belcher's vocals. Now, he shows up during some harmony sections, and even when he did do the leads before it was only for a short time, but I kept expecting a track where his voice is primary, and it didn't happen. Yes, every track is led by keyboardist Janell Belcher; this is far from a complaint, however, as Janell has a powerful voice that sweetly complements the lush indie rock. She also finds herself being stretched, like in the opening track, "Brothers," where she hits some high harmonies in the bridge. "Brothers" itself is a sure sign that The Ember Days have continued to mature as musicians and songwriters. An album highlight follows shortly after in "I'll Never Let Go." It's a little poppier than we're accustomed to from this band, and the music alone will lift up the listener's spirit. At times, it reminds me of All Sons & Daughters and what I've heard thus far from Golden Youth; in other words, it's indie pop at its finest. The guitars are light and happy, the drums are tight, and Janell's voice has never sounded better. If asked, I'd pick this as my favorite More Than You Think track.

"You Are" is a highlight too, doubling as both a pure song of praise and thanksgiving as well as a radio single-worthy track. It has a friendly and accessible sound that would appease not only fans of indie pop, but also the average AC radio listener. The same can be said for the song's lyrics: "I could never count the ways You make me new every day, and now I'm free to live again because You saved me, You are wonderful." The following track, "The Real Jesus," is even more fitting for radio, even going so far as to have that ever-so-slightly country-sounding feel in the song's chorus. It's a bit of a different sound for The Ember Days, and honestly, it may take some time to adjust to, and the lyrics are a little more blunt and slightly less poetic ("I need the real Jesus, I want a love that never ends, unconditional, all-powerful, like the Jesus is"). From a critical standpoint, it may be the album's weak spot, but it's definitely not bad, and would be a great choice for an uplifting song of praise. In a bit of a contrast, an earlier track, "Make It Alright," shows us The Ember Days' darker side. Janell sings from the point of being completely lost and needing God's rescuing, while the guitars, as well as her melody, bring a slightly more brooding sound to match the desperation. The feel of Emergency is still one that has carried on with The Ember Days' evolution; not only is it evident in "Make It Alright," but also to some degree in other tracks like "Frailty" and "Prodigal." But regardless of how dark or upbeat the songs may be, these worshippers are always focused on Christ, whether it's praising Him for His goodness and mercy or it's a call for His redemption and grace.

From the first time I heard The Ember Days' self-titled EP, I knew that they were a special group. Though I didn't fall in love with Emergency, they haven't yet disproven my initial reaction. Coming from the perspective of a music lover, their dedication to continually growing as musicians and lyricists is very noticeable, appreciated, and astounding. I haven't even really mentioned Jordan MacKenzie's drumming; MacKenzie has clearly made the effort to make every strike of a drum pad mean something. Whether the song calls for up-tempo drumming or experimental, indie-style drumming, MacKenzie provides some of the best percussion I've heard on an indie album in a long time. From the perspective of a worshipper, not only are their songs relatable, but they're also inviting, and they translate very well into a live setting. I especially like their instrumentals (which, for the past couple of releases, has always been the title track), which allow the crowd to enter into worship with these brothers and sister as they worship together (Matthew 18:20 always come to mind). Can I use the word "pretty" to describe a track? If so, "More Than You Think" is a pretty instrumental track, vaguely reminding me of "Finger Painting" from their last EP. There's also one that ends the album as a bonus track, called "Holding It Together," which is a little more guitar-centered than the title track, but fits well after the song that precedes it.

The Ember Days have obviously worked hard on More Than You Think, because it's a strong album that continues their legacy and does much to further not only the indie music genre, but also the state of worship music. I'd love to see the industry's top worship artists take on a musical work ethic like The Ember Days. Regardless, they're coming out of the gate strong in 2013, and I hope to catch some of these songs in a live setting sometime this year. Pick up a copy of More Than You Think for not only some great worship songs, but some thought-provoking music by some very talented musicians.