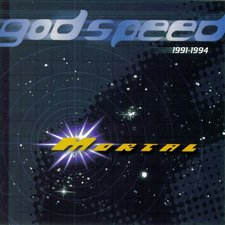 
I found this band, Mortal, through a Wikipedia search for Christian-based rock bands. I enjoy the industrial genre and am partial to greatest-hits collections. Mortal's Godspeed (1991-1994) fits the bill on both counts.

Initially, I was a bit unimpressed with the production values as the first several songs sounded like they were recorded in a garage. The vocals also did not appear to be developed, and came off as rather elementary.

But then there was this "addictive" factor upon repeated listens. There are three tracks in particular that I just cannot get out of my head: "Jil Sent Me," "Mother's Day," and "Paradigm One." These are some of the softer songs, but maybe that is exactly their appeal. "Fray Lagoon," "Grip," "Kingflux," and "Lift" all deserve honorable mention.

One of the reasons for my review is really a question. Is track 6 supposed to be "Bleeder" or "Crack"? I think the latter is a L.S.U. (Lifesavers Underground/Michael Knott) song. But the Mortal version is identical, yet re-named "Bleeder." (Maybe it's just one of those things that I just don't need to know.)

First thought about Mortal's Godspeed compilation? Put it down. After hearing it play a few times? I can't!