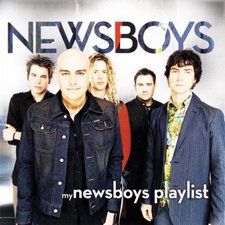 My Newsboys Playlist... Or maybe it should be Twelve Newsboys Hits because I wouldn't put that mix of songs on a playlist to jam out to. They are 12 great songs for someone who has never heard Newsboys before; let's just say the songs are a good start. If you don't really want to hear anything else from this band but a few hits, this is good. But the 'boys have so much more to offer. They have studio projects dating back to 1988, so these songs only scratch the surface. Personally, I think this album should have had 12 rarely played, forgotten songs, but still ones that are great.

The first song on the record is one of their top selling tracks, "He Reigns." It is a great worship song. Track five is "Shine," one of their most well-known songs that I still hear on the radio all the time, even though it originally came out in 1994. "I'm Not Ashamed" is the oldest track on the record, from 1992, their fourth album, but considered their first 'real' album by Peter Furler, the band's former lead singer. Most of the other songs on the record, such as "You are My King (Amazing Love)," "In Christ Alone," "Blessed Be Your Name," "Devotion," and "It is You" are some of their best worship/praise songs, but lack the quirkiness the 'boys are known for. This album is quite like He Reigns: The Worship Collection.

If you are looking for a good worship album by the Newsboys, I'd buy Devotion, Adoration, or He Reigns: The Worship Collection. Otherwise, this is a waste of time. Don't get me wrong, all of these songs are picked out for a reason: they're hits. But they're all the songs that always get picked on ever Newsboys collection CD's. It would be great if they had some not so well-known tracks on there. It would make a better playlist.

As a long time fan of the band, I have to agree with Valerie's thoughts on this collection. For starters, this "Playlist" (which, seriously, couldn't most of us just make on our iPods and it be a stronger playlist that exceeds a mere 12 songs?) focuses on the worship side of Newsboys, which is an important side to the band, but it does leave out a crucial aspect of the band's personality. Several songs on here are cover songs while a couple classics - like "Shine" and "Breakfast" - don't quite fit thematically with the rest of the collection. If it were titled "My Newsboys Worship Playlist," it would fit a little better, but otherwise, this batch of songs is not quite the band's best and it certainly is not my Newsboys playlist. - 5/13/11, John DiBiase of Jesusfreakhideout.com