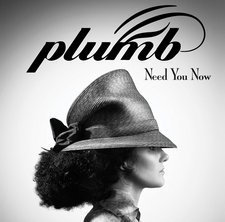 From her early days leading an alt rock band to crossing genres as a solo artist, Plumb's Tiffany Lee has nearly done it all. Her voice has influenced the likes of Evanescence's Amy Lee and brought her into the dance club charts, while her songs have been featured in TV and film (like Jim Carrey's Bruce Almighty), as well as become Christian radio hits. Through it all, she also finds the balance between a strong career and life as a wife and mother of three. Perhaps then it's no surprise that, except for a hits record and a few new singles teasing the promise of something new, things have seemed relatively quiet in the past few years.

Nearly six years have gone by since her last proper full-length release, Blink, and even that was a big style departure, trading in edgy alt rock for gentle lullabies and ballads. Rumors of new music have been buzzing for a while, and after a title change and several release date moves, her sixth studio album, Need You Now<> has arrived as a return to form, an eclectic mix of hooky pop and rock songs that present a multi-faceted portrait of an accomplished artist and a regular woman with a story to tell.

By the time the opening of "Invisible" rumbles in and introduces her distinctive voice, it's clear this is Plumb back to what she does best: darkly melodic, yet hopeful alternative rock. Or at least, that's mostly what happens. Need You Now shows off the different sounds she perfected in her 2006 release Chaotic Resolve. It's all here: the raging rock grit of "Invisible" and "Cage," the ethereal pop vibe of "Drifting" and "Need You Now," and the playful romantic tunes "One Drop" and "Chocolate and Ice Cream," with even a dance remix of "I Don't Deserve You" for good measure.

Even from the early days, her songwriting has never shied away chronicling the darker side of emotion, dealing with abuse, depression, and insecurities while offering hope. The vulnerability that moved and endeared her fans with songs like "Damaged" and "Cut" continues, yet it feels even more personal this time around. A highlight on this record is "Beautiful," a pop song with a bit of an 80's vibe that examines insecurities, the complex nature of marriage, and wonder at enduring love that can still say "you're beautiful, so beautiful to me." The theme is echoed toward the love of God as well in "I Don't Deserve You," a ballad inspired by the story of the Prodigal Son ("And when I walk away / You take off running and come right after me / It's what you do / And I don't deserve you.")

The radio hit "Need You Now" subtly references her personal struggles with anxiety and panic attacks ("How many times have you given me strength to just keep breathing?"), while "Cage" makes a surprising twist toward the end of the record and crackles with emotion as it describes the struggle with failure and depression. But balancing out the darkness is a measure of joy, and "One Drop" brings one of the most lighthearted moments on the record. With an infectious pop hook and cheerful ukelele, the answer is found in "just one drop of your love."

Though it might seem all over the place on first listen, it turns out that this record is a portrayal of life's complexity, all wrapped in a variety of musical styles, a powerful yet vulnerable voice, and emotional and lyrical honesty. Those who have been waiting for more of what Plumb does best will find a lot to love in Need You Now, as it shows off the many sides of Tiffany Lee and makes another strong entry in her career's beautiful history. class="coversize" align=right> Early Thoughts...
Nearly six years have gone by since Plumb's last proper full-length release, Blink, and even that was a big style departure for Tiffany Lee, trading in her edgy alt rock for gentle lullabies and ballads. Need You Now is a return to form, enough that it wouldn't be a stretch to call it a sequel to Chaotic Resolve, though perhaps a bit toned down. It's a mix of the signature styles you'd expect on a Plumb record: the raging rock grit of "Invisible" and "Cage," the ethereal pop vibe of "Drifting" and "Need You Now," and the playful romantic tunes "One Drop" and "Chocolate and Ice Cream." This makes for an eclectic batch of relentlessly hooky pop and rock songs, all unified by Tiffany's distinctive voice. Overall, it's not as aggressive as her previous work, but Need You Now shows off the many sides of Plumb and is another strong entry in her career's beautiful history... --->

Plumb's long delayed Need You Now gives new life to the old adage that 'some things are worth waiting for'. From the distorted guitars and soulful wailing of opening number "Invisible" to the slowly building crescendo of closer "At Arm's Length" (where the lyrics reference the album's former title, Faster Than A Bullet), Plumb delivers sounds that will appeal to old fans, with new textures that will appeal to a broad spectrum of pop music listeners. Dan Hasteltine (a former lablemate and a producer on Plumb's first album back in 1997) shows up for a powerhouse duet of hope in "Drifting," a song for those who find themselves "farther from the shore." A sweet ukulele strum forms the foundation of "One Drop," a song that would rule most pop radio charts if given the chance.

It is in the small (and sometimes uncomfortable) details of everyday life that Plumb shines the brightest. "Beautiful" is an ode to a spouse who does not always get treated properly, but responds gracefully nonetheless. "Chocolate & Ice Cream" is a sweet song of domestic bliss and "I Don't Deserve You" is an honest parental look at the long, long road of raising a child. Put all these themes and sounds together and they add up to one of the best releases of the year. - Tincan Caldwell, 2/25/13