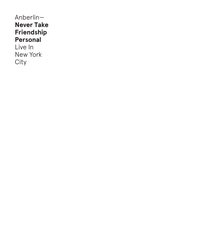 
Anberlin may be done, but their music will stay alive. That's an easy statement for an Anberlin fan to make, but when their former label keeps releasing albums, it's now an uncanny sentiment. In a somewhat surprise move, Tooth & Nail Records has packaged and released Never Take Friendship Personal: Live In New York City, and at this point in history, it serves as gravy for the Anberlin devotee.

Never Take Friendship Personal was Anberlin's sophomore release and was an important album in their run; it represented Anberlin's staying power in the Tooth & Nail circuit, as they moved on from the accomplished but less produced Blueprints for the Black Market to the future of rock possibilities. Fans may debate about this topic until their faces turn blue, but for the likely majority of fans, the band's third album Cities represented a turning point for Anberlin; as their most "epic" album at that time, it transitioned the band from being another pop punk outfit to being a multi-dimensional alternative rock icon. In this sense, then, Never Take Friendship Personal represents a more youthful and carefree band without sacrificing any dexterity, and hence, it holds a special place for many fans.

So listeners might wonder: "Is this album really just Never Take Friendship Personal played live all the way through?" Well, yes. Of course, being a live album, we get the occasional word from Stephen Christian and some audible crowd involvement throughout, but this is largely all twelve tracks of NTFP played from front to back at one of Anberlin's final shows. On Anberlin's last world tour in 2014, the group played a couple of shows in this album format, and releasing a recording of NTFP is an oddly inspired choice. Put shortly, Never Take Friendship Personal: Live In New York City includes every positive element of Anberlin's live shows, and that hasn't always been the case with previous live projects (see Live from House of Blues Anaheim).

And the best part is that these ten-year-old songs still sound great. With so many fan favorites like the title track, "Paperthin Hymn," "A Day Late," and the now ubiquitous hit "The Feel Good Drag," there's plenty for even the most casual of fans to get excited about. The rest of the album, which could easily be dubbed "deep cuts" ("The Runaways," "Time & Confusion," "Audrey, Start the Revolution!") are also unique entries, and the epic closer "Dance, Dance, Christa Paffgen" is an especially top-notch inclusion here, as the band tended to play the track live less and less as their career progressed. What's an interesting aspect of this release is having rhythm guitarist Christian McAlhaney (who joined the band shortly after the release of Cities) sing background vocals for several tracks, and that joins a modern element to the album's nostalgic nature. If there's anything that takes away from this release, the segue "A Heavy Hearted Work of Staggering Genius" feels off-beat and unpracticed, but the explosive intro to "Dance, Dance, Christa Paffgen" takes off all of the built-up pressure.

After hearing the upsetting news of Anberlin's departure last year, fans will be pleased to know that the band would like to share a moment which captures one of their rare concerts that plays the entire of album of Never Take Friendship Personal. Steven Christian does an incredible job of getting the audience involved in choruses, like on one of Anberlin's most popular tunes, "Paperthin Hymn." It really is amazing to hear this band not miss a beat throughout this concert while Steven just wails his vocals as if he could continue singing for another 3 hours. Songs like "(The Symphony Of) Blasé" and "The Runaways" are an enjoyment to hear in live form. Stephen provides a very brief and touching reason for creating the song "Time & Confusion," and states "I wrote this lyrically for my friends here in Anberlin. We were early on in our career, didn't have much to our name, but we had each other. Luckily for us, we found our dear friend, Christian (rhythm guitarist), who joined us and is a member we could never do without again. And still to this day, I want to thank these guys for the best memories of my entire life so far!"

The rendition of "The Feel Good Drag" begins with a much different introduction, giving it an extraordinary experience. A personal favorite, "Dance, Dance Christa Päffgen" is executed so well that it's almost like, dare I say, hearing it again for the first time.

Don't let the plain white album cover with simplified text fool you; this is a remarkably well done live album that should not be missed by any Anberlin fan. If the listener is hoping to have the finest experience possible with Anberlin live without actually seeing them in concert (as this reviewer never had the opportunity), this is certainly it. The only thing that could make this is a better occasion is the addition of this live concert on Blu-ray. - Review date: 5/4/15, written by Wayne Myatt of Jesusfreakhideout.com

Once you get over the initial shock that they chose to release a live album of Never Take Friendship Personal instead of fan-favorite Cities (which is even teased in the greeting to the crowd on this recording)--and then the truly uninspired album cover art--it's easy to otherwise fall in love with this album, particularly if you're an Anberlin fan. As someone who's followed the band since Blueprints..., and who also attended a date on their final tour, there's an incredible energy that emanated during this tour that's truly rare -- and it's amazingly captured on this recording. Not only is it great to hear a 2014 recording of a live rendition of a 2005 studio release, but it just really reminds fans what they loved about this band in the first place. And, really, the crowd shouting the choruses and select verses back at the band just makes it all the more exciting. This may be the first time an Anberlin show was released in live form that truly does their live performance experience justice. - 5/3/15, John DiBiase