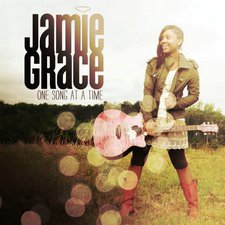 Jamie Grace
One Song At A Time

Last January, Gotee Records president and producer-extraordinaire TobyMac unveiled to the public his newest signee: Jamie Grace. Producing her preview EP, Hold Me, for release two months later, he cited her diverse musical methods and a do-it-yourself enthusiasm (evidenced by videos on her YouTube channel) as his motivation for investing in and developing her talent. The real test of her musical prowess, however, has come in the form of her full-length debut album, One Song At A Time, and it sets a reasonable standard.

As her EP, Hold Me, already demonstrated, Jamie implements an "urban-acoustic" vibe that's hard to compare to anyone else. Undeniably an indicator of the presence of TobyMac's production, her musical fashion is immensely endearing. On one hand, One Song At A Time doesn't provide very many permutations of this style, leading to several tracks starting out the same way and not becoming completely unique in themselves. On the other hand, however, Jamie doesn't compromise her style to appeal to everyone; oftentimes pop albums will feature a song or two that greatly departs from the precedent, meant only for the radio crowd, but Jamie steers clear of this potential pitfall. And while staying true to her own musical personality, she changes it up just enough to create a complete record without duplicates or extraneousness. Most of the songs here are upbeat and positive in nature, but enough slower ballads are thrown in to balance things out ("Come To Me," "Holding On," "Not Alone").

Jamie appropriately matches her optimistic sound lyrically, and for the most part, it works reasonably well. They do lack in complexity enough to want something that digs a little deeper, and for her experience, they are ripe for a richer and more mature songwriting balance. One could easily point out the slightly corny lines here and there ("My left brain is racing free/and ADD's been chasing me all day/Wait, what did you just say?") and the very occasional cheesy pop culture reference ("And I won't stop until I know all my Facebook friends and foes look at me and only see one thing"), but honing in only on these individual lines misses the point of Jamie's admirable lighthearted approach. "Hold Me," "With You," and "You Lead" all rejoice in her relationship with Christ, while "Show Jesus" and "Not Alone" major on encouraging a friend in their Christian walk. Not without pure fun moments either, "1945" and the title track effectively show Jamie's easygoing side ("So just hand me my guitar and I'll play you a tune/me and all my friends, we can sing and dance the whole night through, over and over again/just give me six strings and I'll sing you the truth, note by note by line"). All in all, her musical and lyrical combination is a pleasing one, and one in which many listeners will have little problem engaging.

On its face, One Song At A Time is a promising start from a fledgling singer/songwriter. Though adequate enough for a full-length debut, her unique sound and lyrical approach beg to be developed further - advancements that more experience in the field will certainly provide. As of now, however, many listeners will indubitably connect with Jamie's captivating fun sound and lyrical honesty and transparency, and there's little doubt she'll go far with little improvements - one song at a time.