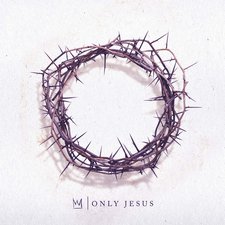 
When considering the juggernaut bands of CCM, Casting Crowns must be foremost in the conversation. Ever since their debut, the band has churned out an impressive catalogue of hit albums and singles. With their latest, Only Jesus, they hope to carry on their success with 12 new tracks, most of which are ready for radio. The record focuses its theme on making Jesus the driving force behind everything a Christian does and tackles different perspectives on this.

Casting Crowns' weakness has always been their music. Their brand of pop/rock leans more toward the bland side as the songs try to court the radio. However, given the blandness of general pop music these days, the group has crafted a sound that comes off fresher than previous works. What helps on Only Jesus is their attempt at varying the arrangements and mixing in different elements. For instance, "Nobody" (which features guest vocals by Matthew West) carries itself with the foot-stomping, hand-clapping fervor prevalent in the current CCM scene, while "Start Right Here" throws in banjo, moody violins, and effects that mesh together well for a distinctive taste. Most of the songs here fit within Casting Crowns' normal mould and mostly service the lyrics, but the group does make some good creative strides.

If music is their weakness, lyrics have been their strength. Even when dealing with overused subject matter that every other CCM band covers, lead singer/songwriter Mark Hall manages to avoid clichés. For instance, opener "The Bridge" takes the old sermon illustration about the cross being a bridge that spans the chasm between us and God and breathes new life into it. Clever wordplay shows up on the chorus of "Nobody" where Hall and company sing, "I'm just a nobody/Trying to tell anybody/All about Somebody/Who saved my soul." The lyrics (and the songs as a whole) are at their strongest when diving to more personal depths (like "In the Hands of the Potter," "Awaken Me," or "The Change in Me"), or bringing convicting truths to bear. "One Awkward Moment" challenges Christians to overcome their timidity in evangelism, but "Start Right Here" brings out the most searing lines: "Want our coffee in the lobby/Want our worship on the screens/We got a rockstar preacher/Who won't wake us from our dreams/We want our blessings in our pocket/We keep our missions overseas/For the hurting in our city/Would we even cross the street?"

There are also some word pictures that get reused thematically (like mention of God's "spotlight") and some songs string together in a nice run that unpacks more with each listen. There are a few clunkers and forgettable tracks here, to be sure, but the majority holds up under close scrutiny while the variations in music and message over the course of the record make for an enjoyable experience. Is Only Jesus Casting Crowns' best record? Longtime fans can wrestle over the question among themselves. Does it hit its mark in message and marketability? That one is more objectively a "yes."