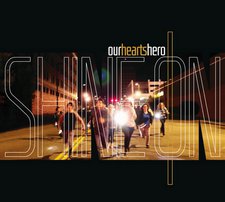 Our Hearts Hero
Shine On

2007 was a big year for a lot of people. Apple introduced the first-generation iPhone. Sting reunited with his band mates in The Police. The folks in Romania and Bulgaria joined the European Union. And, for one brief shining moment, all was right in the world for singer Nick Joyce and his cohorts in Our Hearts Hero. Fresh off of wading their way through years of faithful toil as indie artists, the Huntington, West Virginia, band - aflush with the joy of having just inked a deal with tobyMac's Gotee Records - was busily readying its inaugural major-label effort.

The honeymoon, as it turned out, was short-lived. The self-titled project, released that September, met with mostly mixed reviews. The leadoff single, "Back to the Cross," fell just shy of the Top 20 on the Billboard Christian Adult Contemporary chart. Neither of the follow-up singles managed to eke their way into the Top 40. And, despite a respectable touring schedule to support the freshman outing, the band eventually parted ways with Gotee without ever releasing a second album.

Given this less than favorable turn of events, one could easily envision the OHH collective donning all-black clothing, growing waist-length beards and giving themselves over to somber, introspective folk music. If this was the course they were expected to take, though, nobody bothered to inform Joyce and his partners. Indeed, from the opening strains of their new release, Shine On's barreling modern rock-inclined "Fight Alive," it becomes apparent that the band intends to do anything but take the last five years lying down. The group follows the invigorating leadoff cut with the likewise towering title track and the more pop-leaning (although just as bracing) "Right Now," the latter of which mixes razor-sharp melodic savvy with just the right amount of punk/pop sneer.

For the remainder of the proceedings, the quartet alternates, by and large, between invigorating hard rock ("You Are Everything I Live For," "Get Up") and shimmering, hook-laden pop ("Constant," "Keep Breathing In"), with impressive results. To their credit, Joyce & Co. do toss in the occasional wrinkle to keep things interesting. "Prayer" trades the spit and vinegar of the harder-edged songs for an equally tasty slice of acoustically-driven light pop. The likewise subdued worship piece, "Forever Forevermore," is as beautiful as it is reverent. And the darkly brooding "The Orphans," which is constructed around a series of short, heavily-echoed chants ("We are the orphans/ We are the lost/ We need You") ends the proceedings on an absolutely mesmerizing note.

In fairness, the album isn't entirely without it faults. Parts of it sound a bit too similar. The overly sluggish "Echo" bogs down in its mostly unsuccessful search for a distinguishable hook or melody. And, given the extended song introductions, epic-sounding orchestral flourishes and copious use of compression and reverb, one could rightly wonder if the band isn't favoring form over actual substance. Those things being said, tracks like "Echo" are far more the exception than the rule. The like-sounding cuts, taken on their own merit, are all fine enough. And, even if they were delivered minus their plentiful sonic accouterments, the lion's share of the songs on the new project would still acquit themselves quite nicely.

Although it admittedly isn't nearly a must-have item, Shine On is nevertheless a cohesive collection of infectious, skillfully-performed pop and rock compositions. And while it probably isn't in any danger of being mentioned in the same breath as, say, Lead Me On or The World As Best As I Remember It, Volume Two, it may well, at the very least, brighten the faces of listeners who've waited nearly a decade for the lads of Sanctus Real to make another album that rocks as hard as their first one. The late, great John Denver once referred to the state of West Virginia as "almost heaven." Listening to Shine On, one gets the impression that he just may have been on to something.