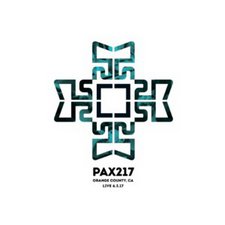 
It was in my mid-teens when I was introduced to the world of Christian music. To help me in my quest to find good alternatives to the worldly music I was enthralled with, I was given a sampler CD with some songs from popular artists. It was the year 2000, so this included up-and-comers like Relient K and John Reuben. It also featured two songs from this rock/reggae/rapcore band called PAX217, which quickly became one of my favorite bands. I followed them up through their untimely demise just five or six years and only a couple of albums later.

Only a few years after their break-up, the band started playing again, but very under-the-radar and without officially "returning." But in 2017, they got together one more time to open for the O.C. Supertones' farewell show in southern California. Thankfully, for those who couldn't attend, this performance was recorded, and now, we have the first ever PAX217 live album - not to mention their first release in over a decade.

The line-up for this performance is almost as classic as you can get. It's by no means the original line-up; if you didn't know, Ethan Luck (ex-Supertones, ex-Relient K, ex-Demon Hunter, ex-a lot of bands) was in an early incarnation of PAX217, called PAX. What we're treated to is the main line-up while they were releasing albums, including Bobbito the Chef, Jesse Craig (who played for the Supertones for a short time), Josh Auer (who is currently with his new outfit CHPTRS), and Aaron "Skwid" Tosti (who spent some time with Hawk Nelson after PAX's initial break-up). This line-up clearly has great chemistry, as they hardly miss a beat after so long away from regular performances together. After a short intro, the band gets right down to business with what is probably their biggest hit, "Tonight." The band's other hits make up most of the setlist, with "Sandbox Praise," "Voices," and "A.M." getting represented, as well as "Check Your Pulse" from their underrated EP of the same name. Bobbito even steps away from the turntables to join David for some raps in "PSA." And of course, the guys ended the Orange County portion of the show with their very first radio single, and the first song I had ever heard by them, "Prizm." At the tail end of the live performance audio are two of the less popular tracks, "Check 217" and "Fly Away," which were recorded at a separate location.

PAX217 Live is available in several different "editions," which can include a bonus track and/or the video recording of the show, but the actual album itself - the free option on their download site - contains ten songs and one intro. Eight of the songs are from the Supertones show in Orange County, with two additional tracks from a live performance at the House of Blues in Anaheim. You'd think that it might be a bit awkward to tack on a couple of tracks from a different show at the tail end of a live album, and it might be, especially when you get a clear closing at the end of "Prizm," but overall, it's mostly just good to hear more music.

The biggest package available for PAX217 Live comes with a download of a demo called "Weightless" and, as mentioned above, the video recording of the live performance. "Weightless" didn't really get me excited as previous PAX songs have, but it did indicate that, had the band made another record, it probably would have followed the stylistic trajectory set by Check Your Pulse, which I would've appreciated, as it had some Taking Back Sunday-esque notions. The video portion has its ups and downs. On the one hand, it's nice to see the band still able to rock the crowd nearly two decades after most of their music was released. This generation of concert-goers is a lot different than the last, with people constantly having their phones out to Snapchat and Instagram the show. Thankfully, the crowd was mostly enjoying actually being there, with minimal phones in view. The band's energy level periodically spiked, with some jumping around and general rocking out here and there, but the real energetic stuff was few and far between. The biggest setback, though, is the camera work. There were a lot of cameras around the room, but occasionally they would spazz out a little, even blacking out for about ten seconds later in the show. There were also distracting moments of photographers and videographers climbing into the middle of the shot, which probably could've been edited out with all the other cameras catching the action.

PAX217 was a big part of my teenage years. Though I don't normally revisit their catalog, their music stuck with me, and listening to these songs, almost all the lyrics came back to me, and I was singing along and reminiscing. It's great to get a chance to hear some of their best work in a live setting, as well as actually getting to see the guys back in action, even if it is in recorded format. Despite any issues mentioned above, this is still a solid release. Of course, it's not likely to draw in those unfamiliar with the band, but if you jammed to PAX217 back in the day, make sure to at least download the free version of the album. I'm sure you'll be glad that you did.