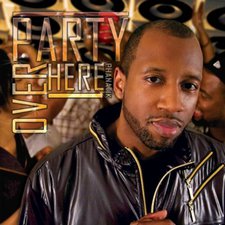 For those who aren't familiar with Phanatik, he is one of the original members of the Cross Movement, and Party Over Here is his third solo release. That being said, he has over a decade of making solid hip hop tunes under his belt and even found time to release a book not too long ago. To say that he's been working hard for the Lord is an understatement.

Let me begin by saying that Party Over Here is a concept album; well, maybe a themed-album would be a more appropriate label. The idea of partying is not only the main topic in each track, but each song has the word "party" in its title (save one). What better way to begin the album than with the "Welcome Party," which serves as a good starter song. Up next is "Block Party" where Brady spits lyrics about leaving the hood life for the Godly life, and "Pool Party," which explores the nastiness and the effects of promiscuity. Both tracks deliver solid production with head bobbin' hooks to boot. Any album of Phanatik's will always have a common goal: turning people toward Christ, and this album is no different. "Prayze Party" details how great God is, "Release Party" focuses on forgiveness, and "Going Away Party" tells the story of Adam & Eve, the Garden, and the fall of man - a very stand-out track. You can't help but be right in the mix as the song plays, and it's a very moving listen.

On top of the good beats you'll hear great lyrical content and flowing hooks like, "I'm not on the corner trying to make a purchase. If I'm on the corner, I'm going to worship." The album also contains quite a few guest spots. Mac the Duolos (from Everyday Process) helps out on the awesome "Slumber Party," while "Sweet 16's" - the original and the remix - offer some other notable efforts from guest rappers. All in all, this is a very solid release; probably one of the best hip hop albums to release during 2010. With the strong content and the nice production, I would recommend it to any lover of the Christian rap genre.