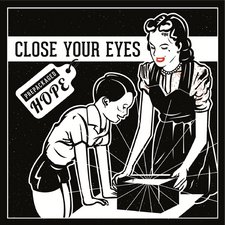 Close Your Eyes released a top notch album, and reached new heights, in 2013 under the new leadership of Sam Ryder Robinson. No offense meant to founding vocalist Shane Raymond, but something about Robinson's addition really seemed to catapult the band. The group follows up their superb album, Line in the Sand, with a short EP. The Prepackaged Hope EP gives a 4-song sampling for fans to enjoy. The first two tracks are new additions, while the second two are acoustic versions of songs found on Line in the Sand. The EP also serves as the first appearance of new lead guitarist Bobby VaLeu, the replacement for long-time member Andrew Rodriguez.

"Chain Gang" opens the EP with a sound that would fit in perfectly with the punk stylings on Line in the Sand. If Robinson's charming accent isn't reminder enough of his British origins, lyrics such as, "There ain't nowhere like London-town I swear," and "the chain gain marches through streets of London" will surely remind you. The fast-paced punk rock anthem will even have Americans who never even left the country singing of London. "Looking Back" is another song that would've worked nicely on 2013's record. The track leans more heavily on the hardcore elements the band displays and features much more aggressive music and vocals. The first acoustic remake is "Frame and Glass," an album favorite from Line in the Sand. While the acoustic version of this song is nice, the most enjoyable track on the EP is likely the acoustic "Kings of John Payne." It's very obvious that both songs have been completely redone and not just acoustic guitars laid over old vocal recordings. The guitars, however, on "Kings of John Payne" are outstanding - especially the picked accents at the beginning.

It's exciting to get a new EP from Close Your Eyes so soon after their last album, but it's a bit sad that it's only 4 tracks. A couple extra acoustic tracks, either new songs or from Line in the Sand, would have been very welcomed. "Trends and Phases" and "My Way Home" could've translated nicely with acoustic guitar. While the EP is rather short, it's still worth picking up for any fan of the band. If nothing else, this little EP should cement the thought that Sam Ryder Robinson was the best choice to replace Shane. Definitely pick up the Prepackaged Hope EP and enjoy this unexpected addition to the Close Your Eyes discography.