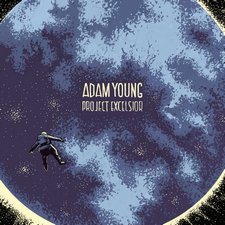 Adam Young
Project Excelsior: The Highest Step In The World

If there is one thing Adam Young has proven with his scores endeavor, it's that he has versatility in his craft. Ranging anywhere from our first exploration of the moon, to the disaster aboard the Titanic, to one of the bloodiest battles ever fought, Adam has proven that his musical ability (and storytelling) is par to none. In all that Adam has created over the last year, many fans have longed for the old "Owl City" sound, something that his latest score brings back.

Project Excelsior retells the story of Captain Joseph Kittinger's extraordinary series of parachute jumps in 1959 and 1960. The jumps were conducted by the United States Air Force, to experiment on a new potentially life-saving parachute made for high-altitude ejections. The third jump, at 103,300 feet, set three world records.

The opening track, "The Pilot," kicks off with a tight electric guitar, followed by gentle synthesizers. It's a pretty simple song musically, and sets a hopeful tone of anticipation. From the get-go, the score sounds like Owl City's Maybe I'm Dreaming, lacing each part together into a landscape of dreamy atmospheric sound. "Preparations" hearkens back to one of Adam Young's side projects, Sky Sailing. A simple acoustic guitar really drives a careful mood through the tune, and a synth-laced piano gives a relaxing vibe to the song. "Helium Balloon" is a remastered version of one of Adam's old demos named "Snowfall." It carries an Ocean Eyes vibe, with wide synths and another guitar-carried medley. This song is unlike anything Adam has put in his scores so far. "Ground Crew" is welcomed with a gritty plucking guitar, and yet another wave of synths. The emotion driving the song is one of excited anticipation, and it really feels as though the listener was about to observe such a feat of greatness.

"The Ascent" hearkens back to a Sky Sailing vibe again, led by the same acoustic guitar as earlier and layered with percussive shakers and a simple drum beat. It really lends itself to the mood of ascending into the upper atmosphere alone, leaving the listener feeling excited and lonely. "The Highest Step in the World" is a reference to the nameplate on the module that Joseph Kittinger leaped from, being the last thing he would have seen as he jumped off. This album highlight is reminiscent of another Owl City side project, Port Blue, bringing a relaxing and outside feel to the song with a little bit of strings and piano. It feels as though the listener is about to finally step off the module and descend into the atmosphere. "The Jump" is the liveliest song on the record, being driven by distorted guitars and a solid drum track. It is quite the change from earlier tracks, sounding more like an instrumental Relient K rocker, than an early Owl City demo. That being said, the track feels emotional and raw, with a hint of fun to it. It's east to imagine falling towards the earth at a crazy 614 MPH speed while listening to this one.

"The Descent" keeps the rocking vibe of "The Jump" going, adding further synthesizers and a more relaxed and awe-filled vibe to the adventure. The guitar in the song plays well with the track before it, adding a seamless freefalling feel to the album. The final song on the album, "On the Ground," finishes out the score perfectly. Taking the acoustic feel of All Things Bright and Beautiful and mixing it with simple percussion, this song stands alone beautifully.

From a scores perspective, it is pretty loosely related to the story, and the moods of the songs don't perfectly match the original grandeur of the jump. The concept of the album isn't as clear in this one, and the performance of the songs were rather simple compared to what the other projects have offered so far. Beyond the story though, this score shines. It feels like an Owl City/Sky Sailing/Port Blue/Scores mash-up album of sorts, and is extremely welcoming to any fan of Adam's early work. It felt inspired and hopeful, playing to Young's strengths in the best way.

At the end of the day, this score is something to love, and is probably Adam's most hopeful record since 2012's All Things Bright and Beautiful. Any fan of Adam Young's music definitely needs to add Project Excelsior to their collection. Pick this one up on AYoungScores.com (for free), or support the artist financially and pick it up from your music platform of choice.

On August 16 1960, United States Air Force Captain Joseph Kittinger ascended to 102,800 feet in a helium balloon and jumped. He did this as part of Project Excelsior, which was initiated in 1958 to design a parachute that makes it safe for pilots to eject at high altitudes. In the process of testing his parachute, this third and final jump broke several sky-diving records, including highest parachute jump, highest speed of a human in atmosphere, longest drogue fall and longest freefall (the latter two are still held by Kittinger to this day). After learning about this accomplishment through a music video released in 2005, Adam Young quickly became inspired by this event, and now he is interpreting the story in his wonderfully imaginative film score series. Project Excelsior sounds more like what one might have expected when Adam Young originally announced he was going to be making film scores: Owl City-type songs that are a little less bubbly and a little more epic. Throughout the record, you'll hear whistling synthesizers paired with driving electric guitars, bright acoustic guitars, and beats made up of drum samples that range from synthesized percussive hand claps to sounding like a real drum kit. Taking a steadier tone than its dramatic predecessors, Project Excelsior makes for a relaxing listen, but the music doesn't tell a strong story--something Apollo 11 and RMS Titanic excelled in. Overall, though, this 7th release from the talented Adam Young is another success. - 8/1/16, Christopher Smith of Jesusfreakhideout.com