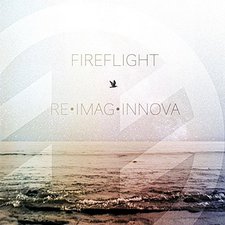 
Two years ago, Christian rock outfit Fireflight released what was, musically speaking, their most controversial project to date. In place of edgy guitars and elements of industrial rock was a reliance upon electronics and synthesizers. This created ample frustration among fans, and while certainly not a studio bomb, INNOVA failed to perform as well as the band's previous efforts. Two years later, Fireflight has reimagined five of the album's tracks on what they've dubbed Re-Imag-Innova.

While most certainly an acoustic project, listeners will have to pay attention to pick up on this, as the acoustic elements are far from forced. In fact, each one of these reimagined pieces feels more natural than their original counterparts, which begs the question of how they were originally envisioned. One of my biggest complaints about INNOVA was the asebnce of the band's traditionally remarkable ballads. This time around, almost all of the tracks serve as ballads. This is in part due to the slower tempos and removal of all electronic sounds. It is also a result of the entire project bearing a somber atmosphere now; something not felt in the original source material.

The album opens with "Keep Fighting," where the percussion and piano work pair quite nicely to create an upbeat atmosphere, at least compared to the tracks which are to follow. "Resuscitate" follows, emphasizing acoustic fingerpicking and some gorgeous, melancholic strings. It's an enjoyable piece, employing a climate that would have fit in well on For Those Who Wait.

"Here and Now" is the song which least atmospherically differentiates from the original. It's a solid piece, but the tempo still seems too fast-paced. "Safety" no longer features Anberlin's Stephen Christian, and his vocals are most definitely missed. In spite of this, it's still a good piece, though the only one which doesn't significantly improve upon the original. Re-Imag-Innova wraps up with "Out of My Head," probably the strongest offering on the album. The only area where it falls short is on the bridge, where lead singer Dawn Michele struggles to hit the highest notes and stay with the tempo. It's quite possible portions of the pre-recorded vocals were used, which would explain this slight bump in an otherwise fantastic song.

Unfortunately, right at the point where another full-length album might be expected, Re-Imag-Innova serves only as a partial correction of where things have gone wrong for the band over the past few years. In truth, it would be far more favorable to have this project alone rather than INNOVA as a whole. While Re-Imag-Innova is a quality, above-average offering, it's going to take a bit more to put Fireflight back on track.