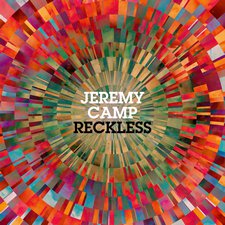 Believe it or not, it's been almost five years since Jeremy Camp's last studio album. Though Camp has kept his name in the CCM picture with a Christmas album, another worship project, and a greatest hits compilation, it's been quite a while since Speaking Louder Than Before hit the airwaves, and Camp listeners are more than ready for a new batch of material. The rock-tinged pop singer isn't finished yet; inspired by the call to lay down everything to follow Christ, Reckless aims to hold nothing back, even if the musical result isn't as demonstrative of its title.

Camp starts out fairly well with the title track, using a piano-driven hook to drawn in the listener to the daring message ahead ("I will not be afraid to surrender my way to follow who you are/I want to be reckless"). It's a punchy opener that cuts straight to the conviction, setting a solid precedent for the album. "The Way You Love Me," a made-for-radio pop cut, hits it hard with strings and a reminder to the listener of God's unconditional love and the need to replicate it. "We Must Remember" thrives upon the promises and the need to reflect on them ("We must remember that You have forgotten, and you don't remember our sins anymore"), while "Come Alive" sees the need to empathize with a fallen world. While none of these tracks are anything groundbreaking for Christian radio standards, these are the highlights that showcase Camp's experience and why he's remained in the scene for so long. There's a certain nuance to them to keep the listener's interest throughout, keeping the album engaging for the long haul.

Despite some strong points, however, a lack of musical or lyrical complexity troubles some areas of Reckless. With a career spanning over twelve years with accolades galore, Camp is one of the more experienced songwriters in the business, but some of the fruits of his labors don't show it very evidently on Reckless. Whether it's a track that doesn't sound very memorable ("Paradise," "Shine," "My God," "Reign In Me") or doesn't reveal much insight ("Free," "We Need"), Camp's latest effort succumbs all too often to meeting his genre's requirements and not exceeding them. At this point in Camp's career, songs like "Free" feel less unique in its approach to a foundational topic of theology and more recycled in its delivery ("Free, I am free/my sin was wrapped around me/trying to drown me/You will set me free"). It's not that these tracks don't speak truth, but listeners have heard these themes time and time again from less talented artists than Camp, leading to an overall lackluster result for Reckless. Camp succeeds at his craft when he focuses in on more complex issues and shuns away from filler musicianship, but Reckless drops the ball a few too many times than is admissible for a seasoned artist.

While Jeremy Camp is thankfully still in the business of writing authentic songs that are unashamed in their inspiration, Reckless isn't among Camp's best work. After the first couple tracks, Reckless declines in the areas of exceptionality, and the few bright spots scattered throughout the project aren't quite enough to save the album from the "ordinary" category. Camp's career can afford to take more risks than are demonstrated on Reckless, and perhaps his next effort will see the musical revival his talent deserves.

Jeremy Camp is an artist in desperate need of a change. The first four songs on Reckless have similar tempos and melodies, and are sung with the same intensity (that Camp has made his trademark), that it's hard to pinpoint where one song ends and another begins. It's not until the album's fifth song, "We Must Remember," that Reckless's songs start to distinguish themselves from one another. After that there are a couple of good numbers, like "My God," that stray from the formula just enough to separate themselves from the pack. "We Need" makes good use of an orchestra and "Without You" ends the album on a suitably humble note. But by and large, Reckless rehashes similar musical and lyrical themes over and over again, and they are themes and melodies that Camp has hit many times before on previous records. This is a shame, because Camp comes across as a man with a large heart for ministry and a passion for the Lord that is undeniable. But Reckless is Camp's 5th album of original material, and there's nothing really original on it. - Tincan Caldwell, 2/11/13