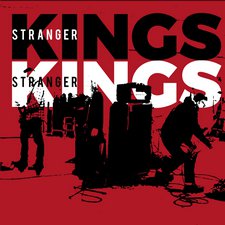 
Whatever else one might say about the members of Stranger Kings, nobody can accuse them of being in a hurry. Here in an era where remixed and extended versions of a given release have a tendency to hit the shelves in record-breakingly quick time - often at the very moment as fans of a given group or artist are kicking themselves for having just purchased the standard edition - the Kings collective opted to let their 2014 Red album marinate an astounding four and a half years before reimagining it as Red Remix (AKA Red R).

Listening to the opening trio of tunes, it would appear that the results were worth the wait. The leadoff cut, "All of Everything (Rtopia Remix)," is also the most impressive. Faithful, for the most part, to its source material, the track is a stirring combination of driving rhythms, gripping melody lines and lyrics that are just oblique enough to allow for varying interpretations without being so much so that they become entirely impenetrable. The live-in-studio version of that same song shows the band more than able to replicate their on-record sound on a dime when called to do so. And the Greg Hobgood remix of "Lay Low" transforms the winning dreamlike original into a driving rock-meets-EDM tour de force that easily equals, or perhaps even surpasses, the inaugural rendition in terms of energy and grit.

Elsewhere, though, things are far more hit and miss. On the one hand, entries like the two-and-a-half-minute "new" cut, "The American," which sounds a bit like the late '70s incarnation of the B-52s doing an instrumental cover of the King's "America's Sweetheart," are both interesting and bracing. For the most part, though, the remainder of the proceedings either run in place without really going anywhere ("The Quit (Ojo Remix)"), add nothing noteworthy to the first iteration of the material from which they draw ("Lacuna (Jeff Schroeder Remix)"), or simply wind up being a case of too much of a good thing (the four versions of "Lay Low").

Of course, none of this should be taken to intimate that the band isn't capable of greatness, as the standout Red album, itself, so convincingly proves. And, in fairness, many of the reimagined compositions, particularly those which lean most heavily toward the EDM side of the spectrum, are arguably more engrossing than their counterparts on the 2014 offering. But, even with all of its relative selling points and high-water marks factored into the equation, Red Remix is still enveloped by the long and imposing shadow cast by its more consistent and cohesive standard-edition cousin, making the latest Kings outing an intermittently interesting and engaging - but still ultimately non-essential - addition to its creators' catalog.