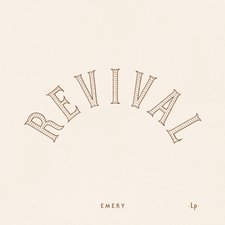 
Though the band isn't in the spotlight these days as much as they were twelve years ago, Emery remains one of the most consistent and talented bands. In fact, 2015 gave us one of their best albums to date, You Were Never Alone. After a successful crowdfunding campaign for their upcoming, seventh full-length studio album, Emery announced that their Classics Reimagined EP, which saw three classic tracks get rewritten and rearragned for the listeners' enjoyment, would become a full-length album in and of itself. To tide over the fans while LP7 is in the works, Emery presents Revival: Classics Reimagined.

Staying true to the word "classics," seven out of the ten songs are from 2007 or prior. The other three are from 2008, 2009, and 2015, respectively. It makes sense that Emery would spend more time revisiting their first three albums, as those were the height of their popularity, and they've already had enough exposure in their former versions.

"Story About A Man With A Bad Heart" kicks it off with what sounds at the beginning like only a slight reimagining. This revamp loses the dissonant guitar chords and heavier drums, replacing them with a pop punk-style riff. Melodically, the song is nearly identical to its I'm Only A Man counterpart, and doesn't really deviate too much until the bridge. Whereas the original version had a screaming section, Emery instead opts to go with a singing/spoken word style to end the song. The tone changes significantly when "Studying Politics" comes in. The opening verse is a bit darker than the original, with haunting synths and an almost sinister approach from Toby Morrell. The song picks up and arguably gets a little heavier than the original, but that might also just be the darker nature of this rewrite. On the opposite side of the spectrum, "As Your Voice Fades" is taken down a considerable number of notches. Where the original relied on a mixture of harsh screams, synth, and powerful electric guitar riffs, the reimagined version takes a mostly acoustic approach. It's not entirely acoustic, but it's a lot quieter and features no screaming at all. Given the subject matter, it makes the song seem more personal and deep than before.

One of my personal favorite Emery songs comes from The Weak's End. "The Ponytail Parades" has been reimagined a couple of times already: an acoustic guitar version on a teaser CD, and a gorgeous piano version on the deluxe edition of The Question. For the most part, the Revival version is essentially a mix of those two acoustic versions. To be fair, it does feature some electric guitar and some new, almost jaunty piano melodies, but it's not new enough to make me very excited about it. But that's a small complaint, when you consider the livelier, more upbeat take on "After the Devil Beats His Wife," the lighter, enchanting reimagining of "So Cold I Could See My Breath," and the somber closing track, "Taken For A Bath." It can be a bit jarring listening to some of these new renditions if the originals are particular favorites of yours, but it's worth the time to get to know them.

Emery's commitment to fan service is unparalleled in the music industry. As an independent artist, fully supported by their audience, you wouldn't expect as much music from them as they're actually producing. But when their fans give, Emery gives back, and Revival: Classics Reimagined is a great listen from start to finish, especially for the longtime fans who have been with them since their Tooth & Nail Records debut. Here's another wonderful album to add to your Emery collection.

When I reviewed Emery's Classics Reimagined EP earlier this year, I noted that its only tangible flaw was its brevity. The fact that the emo favorites chose to make a full-length out of their extra LP7 Indiegogo funds is a testament to both their commitment to their fans and the surplus of creative flow they've still got. Each of these songs is given a unique (but decidedly mature) sonic treatment, yet they all come together to feel as if they've been written during the same period of time. What's even more impressive is that most of these reimaginings prove more engaging than their original counterparts ("Studying Politics" and "Under Serious Attack" in particular), if not at least just as good. Now that there are 10 tunes instead of 3, there are definitely some that stand out from the others, but the level of craftsmanship and twisted nostalgia make Revival one of their best projects to date. - Review date: 11/9/17, Mason Haynie of Jesusfreakhideout.com