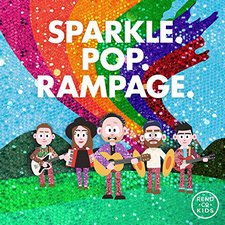 
If there was a spiritual pop / rock band that should have a kids' album in their repertoire, it's Northern Ireland's finest, Rend Collective. This bouncy folk-rock band has been making high energy music with a child-like exuberance for a solid decade now, and a kid's album is a natural extension of what they already do very well.

And it's to the band's credit that despite the goofy cover art aimed at kids, Sparkle. Pop. Rampage sounds very much like a regular Rend Collective album with a few more youthful flourishes thrown in here and there. The opening "Feels Good (Upbeat Song)" is a bouncy blast of positivity that rightly places joy in life in living in harmony with one another. With an infectious groove, the tune has a decided crossover appeal, and wouldn't be out of place on Sirius XM's kid's channel. (The silly music video is worth you and your family's time, too.) The following tune, "Fun," is exactly as advertised, with a bouncy kid's vibe that any five-year-old in the vicinity will immediately latch onto and sing along with. "Go Anywhere" and "Jericho Song" are both a blast of folk-rock energy (Irish style) that would fit on any of Rend Collective's albums thus far.

In fact, it's not until the "Rend Co. Kid's Theme Song" that it's apparent that this is an album that's aimed at kids. The swinging, sing-song "King Of Me" features some silly, Bible story lyrics that suggest a younger audience. The band's early hit "My Lighthouse" also has a child-like quality that makes the familiar tune feel at home here. "God Of Science (Our Great God)" has a similar feel to the Big Bang Theory TV show theme song, and finds the band stretching a bit in the pseudo-rap style. The ending, "True North," is a track from the band's last studio album, Good News, but it feels right at home closing this album out with its catchy, sing-song melody, jaunty mandolin line and its "whoa, whoa" refrain that just begs for a sing along.

With Sparkle. Pop. Rampage., Rend Collective have channeled what they do naturally into the kid's music arena, and come out with a goofy, lighthearted-yet-still-profound batch of spiritual songs that deserve a spot on the ol' minivan playlist. The music videos and kid's website resources that the band has poured their time into also deserve a few moments of parents' time, and are a great resource for kids and Sunday school teachers alike. This is clearly a labor of love for the band, and in following their passions, they have given kids a great soundtrack to jump around on the furniture to.