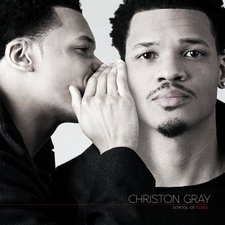 Until just recently, I had never heard of Christon Gray, but then I saw two of my favorite rappers post on Facebook to check him out. Who can resist that? Thus, here we are with an artist who raps, sings, produces his own music and, per his website, is taking a more sophisticated approach to the hip hop game with influences of classical, jazz, and soul tunes. Sounds to me like this can either be stellar or a big disaster; let's see, shall we?

Right off the bat, you're thrown into smooth singing with a rather unique synth style added in for good measure, and you'll start to wonder, "What is this?" You'll have to hang on and listen to the next few songs before any decision can be made on what exactly you're hearing. As it turns out, it is indeed some seriously good flowing R&B. I mean this dude can sing, he can rap a little, and the music is ultra-smooth. The album is titled School of Roses and has three title tracks: "Roses 101," "Roses 102," and "Roses 103" which are clearly the best songs on the entire album. The music is mostly beautifully laid piano keys blended with Christion's suave voice telling of many struggles in life, and the result is a set of raw, emotionally charged tracks. Later on, "Hello Or Goodbye" and "Super Dave" continue to showcase his vocal ability and are good tunes.

You will also catch some hip hop gems on this album in songs like "Moving On" and "Vanish," where Swoope collaborates, creating a nice collective effort on two solid tracks. That being said, not every song is done perfectly, but maybe I'm just being picky here. "Convenient" and "Lady Gray" don't flow as well as the other songs, but ending the record is "Arena," a powerful track about God coming back to save us even though we are so undeserving. All in all, this certainly is one of the better albums I have heard in this early part of 2014, and it will easily make a run for one of my favorites of the year. There are some flaws, and not everyone will enjoy the uber-creativity, but I can't help but really dig it.