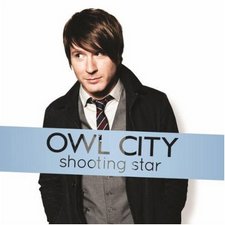 The ever-popular Adam Young has been pretty busy over the last year, having released his second national album as Owl City, All Things Bright and Beautiful, last June, followed by his first ever live DVD earlier this year. It seems quick, but Owl City already has another full-length album scheduled for the summer. To whet the appetites of the fans, and provide a look into what the album's going to sound like, Young is releasing a short EP called Shooting Star, which contains four songs from the yet-to-be-titled album.

The beginning of the first track, "Shooting Star," uses a synth intro originally intended for Ocean Eyes that never worked out (you can really tell, as it bears a vague resemblance to "Fireflies," but Young and the outside producer [a first for Owl City] worked it into a new song very well). It sounds familiar at first, but as you dig into the track, you can tell that this is new ground for an Owl City album. It's still poppy and very accessible, and Owl City fans will probably feel mostly at home, but it has a bit more of a dance music vibe than the synthpop we're used to. The chorus, while still electronic music, sounds like it could have been borrowed from a band like Goo Goo Dolls or OneRepublic. The following track is called "Gold," and it continues the dancier style. Musically, it reminds me of Family Force 5's Dance or Die, but a lot more pop-fueled. Young uses an effect on his vocals when he says the word "gold" that is auto-tune based, and it chops the word and elongates it; it sounds like he's saying "go-oh-oh-oh-oh-oh-oh-oh-old," and it's a little irritating, but at the same time, it's oddly feel-good.

Shooting Star contains the first new track that Young released online in recent weeks, "Dementia." It features a bit of a surprising guest vocalist, but a lot more of a popular singer than Shawn Chrystopher from "Alligator Sky." The second verse of "Dementia" is sung by blink-182 bassist/vocalist Mark Hoppus. It works pretty well with the more alternative-focused music, but with the rhythm and the song's key, Hoppus has to sing a little bit higher than he usually does for blink-182 songs; it takes some getting used to. The song itself is pretty good, and definitely one of the better tracks here. Though the music isn't typical Owl City, some of the vocal patterns are. Some of it may even sound all-too-familiar (listen to the way Young says "Dementia, you're driving me crazy." The last track, which may be my favorite of the four, is called "Take It All Away." I can't make the argument that it's the best song, critically-speaking, but I enjoy it the most. To put it plainly, it's like a one-man boy band, with more of a modern pop style than the boy band style from the 90s (honestly, it's almost like Backstreet Boys meets Justin Bieber - I guess if anyone can make Bieber seem appealing beyond his target audience, it's Adam Young).

The first few times I listened to Shooting Star, I liked it, but I thought it fell far short of previous Owl City music. After several more listens, it got better and better, but with these songs coming straight from his upcoming full-length, it's not enough to convince me that the next album is going to be better than, or even as good as, All Things Bright and Beautiful. But with that being said, Shooting Star still provides for some good music, and a good appetizer for what's to come later this summer.