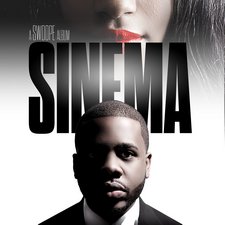 In 2011, four rising gospel rappers (Alex Faith, Dre Murray, Christon Gray, and Swoope) formed their own independent label called Collision Records while simultaneously forming the collective We Live As Kings. Since then, each member of the foursome has put out an album (or two), and released the collective effort W.L.A.K. to well-deserved acclaim, and Collision Records is rapidly rising to levels of respect and success appreciated by few independent labels. Swoope first started making a name for himself as a featured artist on projects from the likes of Lecrae, Trip Lee, and Da' T.R.U.T.H., and then in 2012, released the masterfully underappreciated Wake Up, full of mesmerizingly haunting piano melodies. More features followed with Andy Mineo and KB, and he even joined up with Sho Baraka in his collective High Society. But if there is any justice in the world, Sinema will mark the big break for both Swoope and Collision Records thanks to it being one of the best hip hop albums released in recent memory.

Set up as a concept album about temptation and consequences drawing from the wisdom Swoope has gained from his life experiences and failures, Sinema is about a metaphorical fling between Swoope and the initially innocently attractive Mya Desirae (spoiler alert: "Mya Desirae" = "My Desire"). Most songs either begin or end with voice messages that track the pair's relationship, with each voice message escalating in drama as in a movie, and many songs deal specifically with their relationship. It is without a doubt one of the most well-constructed concept albums I have heard, with a provocative story that isn't so poetic or contrived that it is almost impossible to follow, but that also doesn't distract from the quality of each individual song. It's a strong enough story that I don't want to spoil the "ending," as the drama fully escalates as to the climax of a movie by the penultimate track "Sin in Me." Just know that his "relationship" with "Mya Desirae" has some significant consequences.

But the strength of the story is increased manifold by the strength of the music. "Sinema" opens the album with a strong flair and serves as a foreboding introduction and basic outline of the story (like Spark Notes for the rest of the album). This leads into the almost-disturbingly catchy "On My Mind," as Swoope raps from the perspective of being temped, locked in a battle of whether or not to give in. The story picks up two tracks later with "LSD," where Swoope teams up with Christon Gray's beautiful vocals in a swirling, smooth track about addiction, and flows on into "Bow Down," a thumping track where Swoope tells his struggles to submit to Jesus in his mind, making his decision to "end" the relationship. "Right Side" deals with his conflicting desires to bring Mya back and stay away from her (Aletrnately shouting "Leave me alone!" and "Don't leave me alone!"), and "Beauty And The Beast" starts to make him open his eyes to the extent of the danger he got himself into by giving in in the first place ("She told me that we could make love under the sunset / And when the night falls, we could name the son 'Death'"). "Before Goodnight" and the heart-pounding "Sin In Me" heighten the drama as Mya's voice messages get more and more desperate and threatening, and Swoope gets more and more honest and graphic, until it reaches the "ending." "Fix My Heart" then follows as a beautiful denouement (made all the better by a closing verse from Propaganda), as Swoope reverently turns himself and submits back to God.

In the end, the entire album serves as a metaphor, which is either a reality without God's grace or merely a nightmare with God's grace. It is a beautifully executed metaphor, and one that deserves many, many listens. Also, I didn't even mention "TGC 2" (the sequal to "TGC " from Sho Baraka's collective High Society), "#SameTeam" (an epic seven-minute track featuring five other stellar emcees across label lines) or "Best of Me" since they didn't tie directly into the storyline, though each one is simply excellent in their own right as well. All in all, Sinema is a new standard for concept albums in hip hop, and a true thematic and artistic triumph. I recommend this album without reservation as possibly the best album released this year so far in any genre.