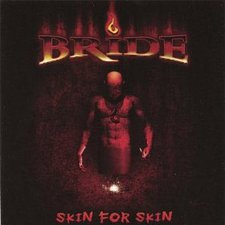 Bride is one of those hair metal bands that came out of the late 1980s. Many likened their sound back then to groups such as Guns n Roses or maybe even Quiet Riot. One of their first major releases of the 21st century was 2006's Skin for Skin. Musically, this album is a complete change from the styles mentioned above; instead, Bride went with a much more industrial sound.

The opening track blasts this record off to an aggressive start and then flows on with each track bringing something unique. "Take the Medication" and "Fuel and Fire" are the most aggressive songs, with front-man Dale Thompson delivering powerful screams and brother Troy giving us crunching guitar riffs. "End of Days" is perhaps the best example of how the band made strides toward industrial metal as this song has a bit of a Marylin Manson sound to it, musically speaking. The two ballads, "Breathless" and "Hang On," come in at the right time in the album's song lineup, although the latter of the two does get repetitive and gives a bit of a weak finish to the album.

Lyrically, Bride does not hide their Christian beliefs. "Inside Ourselves" talks about mankind's selfish living and our need to look to God for fulfillment. In "Rise Above," Bride calls for Christians to not adhere to the world's standards and to declare Christ's love.

If you are a fan of heavy metal or just want a good head-banging record, then Skin for Skin is exactly what you're looking for. If you are a fan of Bride's older works, then there is not much here that will attract you. Either way, these guys write metal like no one else, all the while maintaining a strong Christian message.