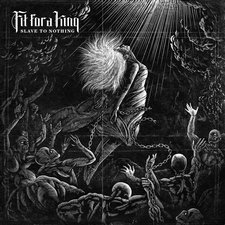 Fit For A King
Slave To Nothing

When Fit For A King signed with Solid State Records in 2012, there were high hopes for the future of the band. Their debut the following year, Creation|Destruction, wasn't Earth-shattering by any means, but it was a solid start for them, and fans dug it. Riding on the momentum, they went back into the studio to re-record their previously-independent album, Descendants, for an official Solid State release (as Solid State did fairly recently with Underoath's older discography). And that's not all; Fit For A King also recorded new material for their second original Solid State album, Slave To Nothing, which sees some great improvements from their debut.

Even upon the first listen, Slave To Nothing is noticeably a great deal more intense in certain places. While it has a lot of moments of melody, and even an all-clean-vocals indie rock song like on their debut, a lot of what you get here is skull-pounding, in-your-face hardcore and metalcore, such as "Break Away," "Hooked," and "Forever Unbroken." A lot of these songs also give you a heavier vocal delivery, even some of them outside of the fast-paced hardcore. "Cleanse My Soul" and "Young & Undeserving" are excellent examples, as they both serve up some powerful and demanding screams and growls that grip your soul. The band is also fond of breakdowns, though they're used fairly sparingly so as not to bog down the album and make it boring and predictable. If there's one thing going for Fit For A King, it's versatility (though, really, there are a lot of things going for this band). They incorporate different styles of hardcore, and even take an occasional page or two from non-hardcore bands like Linkin Park, P.O.D., and Secret & Whisper.

Lyrically, this is a band with conviction and no shame when it comes to the Gospel and truth. The title track shouts "I'm a slave to nothing!" and then later talks about Satan's fate: "Hell awaits the king of lies, the perverse will fall, the beast will burn alive, king of lies, I hope you rot, we're destroying your crown and your walls are crashing down." It might seem grim at first, but then one only needs remember who Satan is, and it's easy to get on board with this message. Later, "A Greater Sense of Self" struggles with doubt and unbelief a little, but the band also makes the claim that life isn't about one's self: "Don't live for yourself, you'll lose it all, the reward is worth nothing, it will all fall, I have realized that the prize is life." This is a band of guys that know what they believe, and it's always nice to hear songs that reflect that.

It's interesting how much improvement can come in such a short amount of time. Slave To Nothing is the result of Fit For A King's hard work and dedication to their craft, and it's one of the best hardcore albums to have been released in an otherwise seemingly lackluster year for Christian hardcore. If you were a fan of Creation|Destruction, you'll definitely want to look into this worthy sophomore release. Fit For A King is on its way up, and I'm excited about their future.

Fit For a King return with their sophomore album, Slave to Nothing, only 19 months after the release of their wildly popular Creation/Destruction on Solid State Records. Their debut record was one that came out swinging for the fences, and Fit For a King bring that energy back for Slave to Nothing. There is plenty of room on this record for them to build on what they've already established and to explore new territory ("A Greater Sense of Self" has a somber, slow opening before kicking in). The guitar tones rip through the piercing shrieks, and both grab the attention from anyone listening. Ryan Kirby, the band's screamer, seems to have a lot on his heart on this record. However, where Kirby is the one who sings about the anger, determination and apathy of life, clean vocalist Bobby Lynge provides a calming, assuring voice in the midst of the metal madness ("A Greater Sense of Self" has him singing, "Have more faith in me/I'm not guided by ways that will lead to nothing"). This album employs quite a bit of chugging, which tends to get old on this record, but doesn't entirely detract from the quality. Check out "A Greater Sense of Self". - Review date: 10/26/14, Dylan Minson