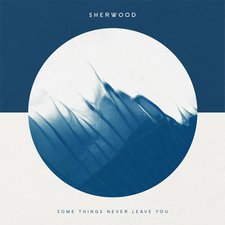 Sherwood
Some Things Never Leave You

Since their formation, California natives Sherwood have won over fans and newcomers alike with their summer invoked pop/rock. Although their style wasn't overly original, it was so likeable that fans couldn't help but be drawn to it again and again. It's been seven years since the band released their last record and the anticipation for the next chapter hasn't wavered in the least. Now, with a little help from their fans via crowdfunding, Sherwood have released their fourth full-length record, an indie/pop gem aptly titled Some Things Never Leave You.

"Outside/In" opens the album with a driving hook that calls back the style of their earlier records. This is layered with a beautiful guitar melody that introduces fans to the newest sound offered. "Closer to You" and "Little Bit Better" are both fun pop tunes about the struggles of lost love and self-acceptance. They draw the most inspiration from their last record, QU, but elements of A Different Light can also be found, especially in the chorus of "Little Bit Better."

The first major highlight of the record, "New Year's Eve," is a gentle ballad about a surprise visit from the girl introduced in "Closer To You" at a New Year's Eve party. It's a warm and joyous celebration of a beautiful moment that shows us why Some Things... is more than just another pop record. Underneath its relatively simple surface is a profound story of sacrificial love, forgiveness, and change.

"Back Home," the direct follow-up to "New Year's Eve," details the tearing struggle of forgiveness and the fear of change, "I think you better turn that car around / judging by the tears you left in wake / running up the road won't narrow down the options in front of you." Musically, the track focuses more on atmosphere and ambiance than the previous four. This causes the mostly instrumental second half to last a little longer than needed.

"Bottle It Up" and "Believe" usher in the band's rock side with flawless execution and production. "Together Alone," while admittedly the weakest track on the record, still possesses standout elements, such as the throwback 80s vibe in the chorus.

Even with its sheer high number of highlights, "The First" is undoubtedly the standout track on the record. It's a graceful ballad that manages to sweep listeners off their feet from its piano-led intro to its gorgeous finale. Its place in the album's concept is the pivotal point of change for the protagonist as he recalls the love of his past relationship. "I never thought of what I'd become / but that's what I'm trying to see / cause I'm not who you know I could be / I'm not who I wanted Once in awhile I'll remember the day / caught in your current, drifting away / never forgetting that you are the last one.... 'cause you were the first."

The record closes with the rock ballad "The Unknown," which bookends the theme of stepping out of our comfort zone to "transform in others' eyes" established in "Outside/In." Unfortunately, the song's refrain utilizes an unnecessary use of the word "d*mn," which does hinder its appeal. Despite this disappointing lyric, "The Unknown" is a brilliant close to the album.

Overall, Some Things Never Leave You is one of the best reunion albums in recent memory. Existing fans of the band will be more than satisfied while new listeners will be won over by the band's addicting sound. If you're looking for something new to add to your summer playlist, Sherwood has got you covered.

I had the good pleasure of discovering Sherwood nearly a decade ago when they opened for Relient K and/or Mae (I think both...hmm...). Their bouncy, slightly retro-sounding pop rock instantly grabbed my attention. Now, all these years later (at least half of them spent in hiatus), the guys haven't lost a step and have released one of their best albums; suffice it to say that Some Things Never Leave You is an appropriate title. With a little bit of Death Cab For Cutie and Keane influence, Sherwood's latest is very pleasing to the ears. "Back Home" is perhaps my favorite track, with a steady, upbeat rhythm and a story of love lost, though not permanently. "Bottle It Up" is great, too, with a hint of early Copeland and more of an alternative rock feel than the previous song. I didn't follow Sherwood very closely before, but their return has sparked a newfound interest (and as of right now, most of their discography is free on their Bandcamp, so it works out). There's little reason not to pick this one up, so make haste! - Review date: 7/9/16, Scott Fryberger

Sherwood is back! Some Things Never Leave You picks up where their phenomenal summer soundtrack QU left off--playing right into fans' nostalgia while still showing a significant amount of growth. Infectious pop melodies, Nate Henry's confident yet soft vocals, poignantly poetic songwriting, and skilled instrumentation all beautifully mesh on these 11 tracks. You'd be hard pressed to find a more satisfying and enjoyable record so far this year. - 6/15/16, Christopher Smith of Jesusfreakhideout.com