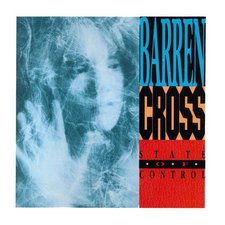 
As any artists who has turned out a career-defining work can tell you, watershed projects, for all of the accolades and opportunities they provide, often create unreasonable expectations for whatever happens to follow in their wake. Such was certainly the case for the LA-based quartet, Barren Cross, whose tour de force Atomic Arena album did serious business on the mainstream hard rock airplay charts, spawned a heavily-rotated MTV video single, and eventually went on to be named one of the top 20 Christian metal albums of all time by the folks at Heaven's Metal magazine. To say that the record set an imposing high-water mark for the group's next undertaking would be an understatement.

In one sense, and perhaps not surprisingly, State of Control sounds almost exactly like its predecessor. "Stage of Intensity" and "Inner War" feature the same speed and progressive metal elements upon which Arena-based cuts such as "Cultic Regimes" and "Living Dead" were constructed. And much of Control, like its forerunner, is populated by the same radio-friendly brand of lite metal that was bread and butter for acts like Warrant, Winger and Motley Crue back in the day. But, where the previous release was the product of a fresh-faced, slightly rough around the edges, group hungry to justify its standing amongst its mainstream peers, Control is the sound of a seasoned, well-oiled band, now comfortable in its own skin, turning out a polished, professionally-crafted set of songs.

The change is obvious on the topical front as well. Where Arena was divided roughly down the middle between hard-hitting social issues and strictly spiritual concerns, here the ratio is tweaked significantly. The band still tackles weighty matters such as racism ("Bigotry Man") and alcohol abuse (the title track). And cuts like "Inner War," which discusses the universal struggle with sin, and "Out of Time," which warns of the inevitability of Christ's return, are unmistakably Biblical in nature. Unlike the last effort, though, nearly a third of Control contains what could best be described as crossover material aimed squarely at mainstream radio, with topics ranging from romantic getaways ("Escape in the Night") and the joys of married life ("Love at Full Volume") to good love gone bad ("Cryin' Over You") and the inherent elation of the live concert experience ("The Stage of Intensity').

Of course, it should go without saying that the above-mentioned musical and thematic departures are hardly a liability, in and of themselves. This time around, though, a handful of the songs are propelled by mostly run-of-the-mill melody lines and rhythms that could only be described as pedestrian, at best. This lapse in quality is particularly obvious on tracks like "A Face in the Dark" and "Your Love Gives," each of which happens to fall victim to both of these shortcomings. On the other side of the coin, entries like "The Stage of Intensity" ("There is a chemistry in here/ Intense enough to make them cheer/ Until the end of next year") and "Two Thousand Years" ("They'll tell you don't need God/ They are the ones who will burn/ Burn in hell") show that, despite taking incremental steps in the positive direction, the band's lyrical skills are still very much a work in progress.

In its defense, even the sum total of its instrumental and word-related lapses aren't nearly enough to submerge what is still, at its core, a more than respectable showing, particularly when stacked up against other rock-based projects from this time period. And hats off to the group for refusing to bow to the temptation to simply replicate the formula which rendered Arena so hugely successful. Not quite as engaging, energizing or consistent as its forebear, State of Control still remains a recommended purchase for fans of both driving hard rock and seamlessly-executed heavy metal.

The 2020 reissue remasters the original 1989 release and includes the bonus cuts "Your Love Gives" (which wasn't available on the mainstream version of the album) and "Escape in the Night" (which did not appear on the version distributed to Christian bookstores). The limited-edition (1000 units) offering also contains a 16-page booklet featuring lyrics, rare band photos, and newly-written liner notes from Retroactive Records owner, Matthew Hunt.