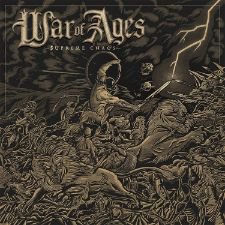 In just 12 short years, War of Ages have gone from a relatively unknown little band hailing from Erie, PA to one of the forerunners and frontrunners of the modern Christian metal scene. Having toured with the likes of Soilwork, Living Sacrifice and the now defunct As I Lay Dying, who are perhaps their closest modern contemporary, War of Ages have displayed a steady and impressive maturation since the release of their self-titled debut album in 2004. In fact, it could be argued that they're one of few bands who consistently release their best album with each new release. 2012's Return to Life saw the band sticking to what they do best and had their strongest and most refined songwriting to date, but received a lukewarm response from longtime fans and critics alike, likely because they still seemed reluctant to reach outside of their comfort zone. These concerns, however, can be laid to rest, because the latest opus from War of Ages, Supreme Chaos, is easily their heaviest, most dynamic and fully-realized album to date.

What's immediately obvious as soon as the opening notes of "From Ashes" play is that War of Ages are dabbling with electronics this time around, a trend that has become very prevalent in modern metal. This is something the band has never experimented with in the past, and this newfound sonic quality is used tastefully throughout the album as a whole. It is a welcome and unique addition to the War of Ages sound that adds something new to their compositions. The electronic sounds are interwoven with the vicious attack of the guitars in such a way that it adds even more punch, such as in the syncopated rhythms and stuttering, borderline djent riffs of "Chaos Theory." Some parts of the album even venture into more progressive and classical territories, which probably has something to do with the addition of new guitarist Jack Daniels, who you might know from a little band called Hope For The Dying. His songwriting contributions are probably one of the best things to happen to War of Ages, and his shred-tacular lead work is staggering. The dueling solos between him and founding guitarist Steve Brown are definitely one of the highlights of Supreme Chaos and demand to be listened to over and over again. Listen to "Lost In Apathy," by far one of the best songs War of Ages have ever written, to hear what I mean.

War of Ages have always had a fantastic sense of melody, and the melodies contained within Supreme Chaos are as catchy as they are moving. The battle anthem "Lionheart" is epic in its sound and contains a soaring guitar melody during the chorus that makes you feel invincible. That being said, War of Ages haven't sacrificed any of their relentless heaviness for melody. The riffs are mighty and the breakdowns, thunderous. Heed this warning: your neck just might be a little bit sore after listening to Supreme Chaos. The band made a good move in choosing Joshua Barber (Norma Jean, Everything in Slow Motion) to produce the album and Will Putney (Impending Doom, For Today) to mix the album. The production on Supreme Chaos is clearer and harder hitting than any of War of Ages' previous efforts.

Lead vocalist Leroy Hamp's lyrics are as challenging, inspiring and worshipful as ever, and there is an uplifting undercurrent that runs through the entirety of Supreme Chaos, whether it be found in the lyrics or the major key riffs that makes the album feel like a powerful and immediate call to arms for all Christians.

Overall, War of Ages have unleashed a metal masterpiece with Supreme Chaos. There's no disputing that this is the best album they have ever written, and with the addition of the brilliant Jack Daniels to the already stellar lineup, this could mark the beginning of a new chapter for one of Christian metal's most gifted prodigies. Supreme Chaos comes highly recommended.

In 2012, War of Ages released what can best be described as the final page in stack of carbon paper: You know what it is because you have the original, but the quality just isn't there. Return to Life was a big disappointment for many fans, but others still praised them for being true to themselves as a band. It's now two years later and the metalcore favorites have released the record I was hoping for two years ago. Perhaps the change from constant chugging at the same pace throughout every track can be attributed to the band's newest members. The group added Jack Daniels (not the whiskey) on guitar in 2013 and Elisha Mullins on bass just this year. What you get with Supreme Chaos is the War of Ages you've come to know and love as well as some experimentation, different sounds, and tempo changes you're probably not accustomed to with them. While this is not their most "metal" album, it is, however, possibly their best musically. The sound varies from song to song (and even within the same song) and the album remains interesting from front to back. One of the best examples is in "Chaos Theory." The song mixes electronic elements with a classic metal influence and then tops it off with some standard metalcore fare. WoA has introduced 10 new and recognizable songs for their fans to enjoy. The monotony of Return to Life is gone and the instrumentation is as amazing as ever. It appears that Supreme Chaos has become WoA's literal "return to life" as they've proven why they've been around so long. War of Ages has released a shining star in a rather lackluster year of metal music; you're definitely going to want to pick this one up. - Review date: 2/13/14, Michael Weaver