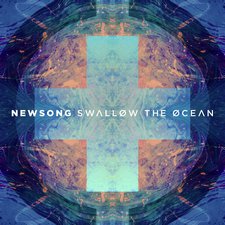 Newsong has been a staple in the Christian Music industry dating back to 1980, and along the way they have seen no end of success, from being the founders of the Winter Jam Festival even to the extent of achieving a number one mainstream hit in the holiday classic "The Christmas Shoes." Enter Swallow the Ocean, the 18th album studio release in the bands history. Now, the debate between the respective importance of ministry and artistry probably dates back to before Alexander the Great, so I doubt there is anything more that I can add to it that hasn't already been said. Anyone who is familiar with Newsong knows that anything they give us is going to be made with pure hearts and pure intentions, and their message is going to be 100% fully Christ-centered. For that, I applaud them and can fully recommend them to those seeking an album with those qualities. But 11 AC radio singles on one compact disc that are designed to meet the lowest common denominator for listenership does not great art make.

In all honesty, the first impression that this album gives is actually quite positive, and many might think they will be pleasantly surprised. First of all, Swallow the Ocean is a great title. The imagery there is great, as is the concept behind it. Newsong's multi-instrumentalist Matt Butler said, "If we were to fill the entire ocean with ink, and if we were to take pens and try to write the love of God across the sky, we would drain the entire ocean dry and still not even come close to touching the surface of God's greatness and the bigness of His love." Somewhere in this concept, there is a really good album. Was this to be a precursor to an original and praiseworthy new project? Well, the opening song, "All I Need," doesn't really raise those hopes, but it certainly doesn't make them crash and burn (was there actually some crunch in that guitar in the hook?) Even "Choose to Love" doesn't dash all hope thanks to another catchy hook and some more impressive made-for-radio production. But by the time the title-track comes around (that is, the track that theoretically realizes the vision of the quote above), then all hope of an original project is pretty much gone. In the end, this album is exactly what could have been expected from Newsong: approximately a dozen uplifting, made-for-radio songs with straightforward and clichéd lyrics heard on dozens of other worship releases set to impressive production of unimpressive music mixed with some catchy hooks.

God knows no one can fault Newsong for intentions. In a way, they are merely doing exactly what they need to do to reach the greatest number of people. How can one possibly criticize that? But the ultimate result from a musical standpoint is nothing less than repetitive and tiresome. In a way, it is kind of ironic (and, quite frankly, a little insulting) that the concept behind the album is that even the ocean cannot contain enough ink to write everything about God, but the actual writing on this album is nothing that hasn't been written before. But the thing that is the most bothersome is that Newsong is absolutely capable of making truly great music. They have enough budget, they have talented producers, they have many talented instrumentalists, and I'm sure someone in this 7-person group is a truly talented songwriter. I dearly hope they realize that they have made enough of the "same old same old," and it is time to move onto something new. It may involve them stepping out of their comfort zone a little, but I also know that God does not call us to live in our own comfortable little world either. So please Newsong, create for us a new song. I eagerly long to hear it!