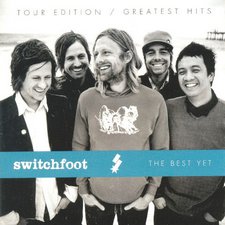 
Switchfoot has been one of my favorites for a long while. I have to say The Best Yet: Tour Edition / Greatest Hits is one of their more "interesting" releases. This album is called "Tour Edition" because they only sold it at merch tables at concerts in 2008. It is a cheaper album with actually 7 less songs than the original, retail-released album.

The album starts with "Dare You To Move," my favorite Switchfoot song, and continues strong with more great choices, like "Meant to Live" and "Stars." However, I am dissapointed that other songs aren't on here, just like on the original edition. Songs from their first 2 albums, The Legend Of Chin and New Way To Be Human, aren't on here or the expanded version, but "Chem 6A" is on the Deluxe Edition. It's just a little upsetting that, for the price this is, that at least 3 more songs could have appeared on here.

With that said, for the price, the fine tracklisting, and great songs to boot, I would say this album is just fine the way it is!