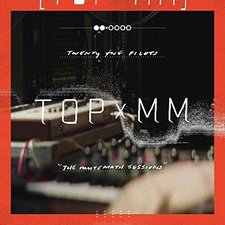 
It's been over a year since "schizoid pop" duo Twenty One Pilots released their fourth album, Blurryface, which multiplied the success they achieved with their major label debut, Vessel. In the time since, the Pilots have been busy touring and performing for packed venues. Amidst all this busyness, the Pilots surprised fans on December 19 when they released an EP--a collaboration with the experimental rock band MuteMath. Twenty One Pilots fans were delighted to listen to something new, and TOPxMM: The MuteMath Sessions continues the Pilots' trend of releasing a project that sounds different from the last. While listening to this EP, some may wonder why these two groups haven't collaborated sooner, as the focused, innovative nature of MuteMath complements the high-octane energy of Twenty One Pilots nicely. Sessions proves to be somewhat of a mixed bag of goodies, but even sour candy is still enjoyable...

The first of these Sessions tackles one of the Pilots' recent radio hits, "Heathens," which was featured on the soundtrack for the film Suicide Squad. Instead of launching right into the song, like the original studio version, the song crawls in with a foreboding, atmospheric intro, featuring a cello and echoing synthesized vocals. Tyler Joseph's voice enters into the void, reverbed yet isolated against the chilly soundscape. Once the opening chorus ends and the song bursts to life, the immediately noticeable difference is the absence of the gritty piano and electric guitar sample that dominated the original version. Instead, the Pilots and MuteMath opt for an ethereal, otherworldly sound, which is pleasant to listen to, but lacks the aggressive bite of the original, particularly during the musical interlude which lacks the menacing repetition of the line "Watch it."

Blurryface opener "HeavyDirtySoul" picks up the pace nicely after the mid-tempo "Heathens." MuteMath's Darren King drums side by side with the Pilots' Josh Dun here, and while both drummers' distinct styles can be recognized, their beats still integrate seamlessly. This track doesn't stray far from the original arrangement, but rather enhances it, making the instruments sound more defined while adding a few more electronic flourishes.

Listeners who were hoping for more experimentation in Sessions will be pleased with the next three tracks, "Ride," "Tear in My Heart," and "Lane Boy," also all from Blurryface. "Ride" is the standout track of this EP, with its breezy, electro surf-rock vibe and the energetic, trippy little jam session at the end of the song. Conversely, "Tear in My Heart" exemplifies the drawbacks of this EP. On one hand, this track is the most experimental on the project: the musicians play with timing, the percussion variates from traditional drums to bongos and back again, we hear a delightfully hyper keyboard and a harmonica in the intro, there's some super groovy bass work from MuteMath's Roy Mitchell-Cárdenas, and the background vocals in the chorus are hauntingly lovely. All these elements combined, however, only make for a song that sounds good but gets lost in conveying its message. This was one track where Joseph's vocal delivery competes with the myriad of musical elements surrounding it, and lines like "My taste in music is your face" don't come across as playfully as they do in the original.

"Lane Boy" is a solid and appropriate closer for the Sessions, as it provides room for all the musicians to really go crazy and jam out during the interlude and into the end. The song opens pretty ordinarily, but after the two minute mark, all holds are broken and the musicians let loose, especially King, Dun, and Paul Meany on the synths. It's all organized chaos, and it's wondrous to behold, and then it suddenly grinds to a halt, leaving us wanting more as the Sessions come to an end.

Overall, TOPxMM: The MuteMath Sessions is a successful experiment. While this release is not perfect, and it probably won't convert any casual listeners, it is still a delicious sonic treat to tide fans over until the Pilots take off again with their next release. For an enhanced listening experience, watch the 25-minute long video of Twenty One Pilots and MuteMath recording the sessions live, featuring some behind the scenes footage and neat cinematography. TOPxMM: The MuteMath Sessions is available for free until January 19th, and for those who choose to purchase the EP instead, it is well worth the price.