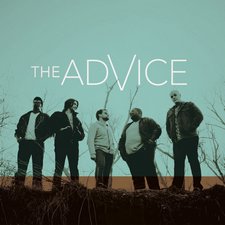 When I was younger and would spend time in the Christian bookstore looking for good music, there was a chart of sorts that I noticed frequently. It said something along the lines of "if you like [insert secular artist], you'll love [insert Christian artist]." For example: if you liked Eminem, this chart firmly believed that you would also love John Reuben. The accuracy of such a statement may leave much to be desired, but I was frequently reminded of such guides while listening to The Advice's self-titled Inpop debut.

As soon as the opening track, "You Give Me," starts to spin, you might find yourself thinking "Hey, a Christian Maroon 5!" The pop rock sound mixed with some funk and soul is unmistakable. It's upbeat, fun, and catchy for sure. At the same time, the softer, more AC radio friendly tracks tend to bear a distinct similarity to Dave Barnes' music. The band as a whole takes a pretty generic approach to each song, playing simple beats and straightforward guitar chords. There's the occasional violin line in the background in the ballads, or a dash of horn section in the more upbeat tracks. Vocalist Matt Houston doesn't have as unique a sound as Adam Levine, but then again he doesn't fill his music with profanity and sex either. If a sanitary Maroon 5 is what you're looking for, there's a good chance you'll enjoy this album.

Unfortunately, there just isn't much meat to this whole project. As mentioned before, the musicianship is really average, seeming destined to find a comfortable rotation on CCM radio where it will be sure to not shock or awe any listeners. There's no denying some songs are very catchy, and they are enjoyable as far as that goes. "Your Light Shines" is probably the highlight of the album, combining an uplifting chorus with thoughtful lyrics. But for the most part, there's not a lot to get excited about. Some of the melodies are more awkward than catchy, as is the case in the chorus of "All a Raindrop Knows." "Holding On To You" sounds like it was written using a Ballad Writing 101 guide, hitting all the right emotional stops on top of totally innocuous production. I was reminded of some old Kutless ballads, but with a less appealing melody.

The lyrics are also sadly disappointing. Virtually every track is some variation on the idea of "Jesus makes life great," with frequent references to the sun shining, even "when it gets cold." Of course, these sentiments aren't false but they tend to be awfully shallow. Sadly, the current environment in CCM music expects "positive" messages, so these lyrics will probably go over very well on the radio. I was especially disconcerted with the song "His Name is Jesus," which declares that "His name is Jesus and he can fix all your problems." While it's true that Jesus can fix any problem, there are also plenty of Biblical promises that Christians will have struggles and difficulties in life and problems won't just magically disappear upon salvation. This is unfortunate because that track is musically one of the more interesting songs on the album.

Going back to the very beginning, I won't deny that this album serves a purpose. The Advice do a decent job of appropriating a popular musical style and accompanying it with a more beneficial/less offensive message than what's played currently on secular radio. To that extent, they succeed and deserve to be noticed. But there's more to good music than a positive message. In terms of pure artistic creativity and spiritual depth, this album is simply lacking.