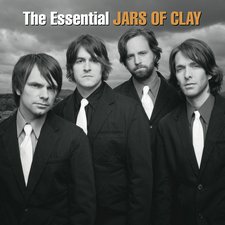 
In 2007, Jars of Clay's contract with Essential Records came to an end. As a culmination of the more-than-a-decade tenure, Essential released a brief collection of live recording from the Good Monsters era, entitled Live Monsters, and a compilation by the hand of their Essential Series.

The compilation consists of 2 CDs following a chronological path. The first disc recollects songs from their eponymous debut up to the GRAMMY earned, The Eleventh Hour. Their well-known hits, like "Flood," "Fade to Grey," "Unforgetful You" and "Revolution" are included, and lesser-known ones complete the set. Although the content is varied, if you are a die-hard fan you will notice that there are some missed minor ones, like "Overjoyed," "Collide," "No One Loves Me Like You" and "Like a Child." But despite its lack, the collection rewards listeners with rare jewels from their extensive catalogue, like fan favorite "The Coffee Song," from the Seatbelt Tuba Sessions and "New Math" from the Tweed Horse Sessions.

On the second disc, they bring it on "Shipwrecked" and "Tonight," both B-Sides from their reinvented Who We Are Instead. Their reworked album, Furthermore, is represented by "Dig" and "Needful Hands," this last one being an especially excellent addition. While the hymns attempt, Redemption Songs only have respresentation here, they chose to include other contributions, like "This Road" from City on a Hill or "The Widowing Field" from the We Were Soldiers movie soundtrack. From their then-latest project, Good Monsters, were chosen the singles "Work" and "Dead Man (Carry Me)." They also decided to include Haseltine's duet with Leigh Nash, "Mirrors and Smoke." Two Christmas songs close this compilation, "Bethlehem Town" from their collaboration City on a Hill: Christmas and "Little Drummer Boy" from their 1995 EP of the same name.

This collection gathers hits, B-Sides and rarities from the band's prolific catalogue, something which is hard to find altogether in a compilation. There are some missed ones, but considering the bunch of gems included in this 2-disc set, it becomes an excellent one, either for longtime-fans or newcomers.