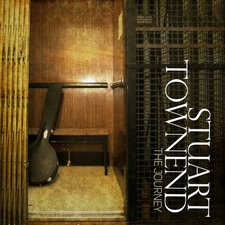 Even if one hasn't heard of Stuart Townend, there's a great chance they are familiar with some of his songwriting talents. While he's famous for the songs "Beautiful Savior," "The Power of the Cross" and many others, his songs written alongside Keith Getty such as "In Christ Alone" and "By Faith" have made the most waves, establishing them as a key songwriting duo in the modern church music world. As a recording artist with Kingsway, Townend has set out on The Journey, giving listeners an accurate look at his worship ingenuity.

Kingsway is a juggernaut among worship labels, though it would be fair to say that they have a varied mix of impressive and lesser-so artists. But even though Townend is one of the more influential artists on the label, he's also one of the more intriguing musically, and The Journey is proof. Boasting a "contemporary folk" approach, Townend's ninth studio project on Kingsway dons anything but a standard worship sound. The opener "O My Soul" features banjos, violins, bagpipes, and a slew of other folk instrumentation, and it's only the beginning. "Vagabonds," "Kyrie Eleison" and "You Rescued Us" all follow the same suit, exposing a strangely attractive worship style many may not know about. Any listener not knowing what to expect could immediately be thrown off, but when tracks such as "By Faith" and "The Perfect Wisdom" take things closer to home for the listener, it holds the record together well. In the end, this style carries through to the end of The Journey, and it helps more than hinders the record's enduring quality.

Of course, if folk isn't the listener's style, it could be harder to buy into The Journey. Indeed, this reviewer didn't know what he was getting into after five minutes through the album, but it didn't take long to find admiration for the style, especially when it revealed much more variety. In sticking with Townend's folk tendencies, his vocals are more classical in nature, and though they take quite a bit of time to get accustomed to, they match the style perfectly. Another folk singer, Ruth Notman, is featured on "The Man Who Calmed the Sea" and "Simple Living," and her voice talents really improve the record's appeal on the whole. The former is a striking duet with Townend (and probably the album's finest track), telling Christ's story of ministry in hymn form ("See the stricken boat as it is tossed upon the sea/hear the fitful cries that wake the man from Galilee/He stands before the raging, speaks peace and harmony/winds and waves obey, He is the man who calmed the sea"). In fact, modern hymns seem to be the rule of thumb on The Journey, a worship style that is becoming more and more common, but still somewhat obscure.

While both originals and familiar songs such as "It Is Well With My Soul" are executed well, it's some of the latter tracks on the record that lack the power of others before them. "Everlasting Love," "Never Failing Love," and "Christ Be in My Waking" all suffer from falling into a "worship mould" and don't match up with the distinctive character of some previous cuts. But little gripes notwithstanding, The Journey is truly a unique worship experience. While not a flawless album, it's still a breath of fresh air in an ailing genre, even if it is an acquired taste. For the daring, Stuart Townend's latest endeavor is at least worth a try.