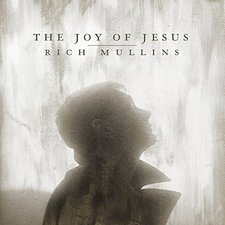 
September 19, 2017 marks the twentieth anniversary of the surprising and tragic death of Rich Mullins. In those twenties years since, Mullins' reputation and impact on people, myself included, is surely more vast and profound than he would have ever imagined -- or even believed if you had tried to tell him. To commemorate this date, three singers (Matt Maher, Ellie Holcomb, and Third Day's Mac Powell) have been featured on "The Joy of Jesus," a new version of an old, obscure Rich Mullins tune. In many ways, this new single is akin to The Jesus Record, an album recorded shortly after his passing, where a group of close friends and collaborators created what would've been Mullins' next album, based on demos recorded not long before his death.

"The Joy of Jesus" isn't nearly as faithful to its original recording, a live cut captured in the late 70's. This new version removes the most interesting facets of Mullins' original music and lyrics. There's also lyrics added; while these new lyrics, sung beautifully by Holcomb, aren't anything special, it makes for a gorgeous section of the song. The vocal performances are great, especially when all three singers join together for the climactic harmonies at the end.

It's an oddly structured song both in its original conception and in this version, clocking in at merely 2:38, and it would've been nice to see these artists expand on the song rather than tame it down. Nevertheless, it's a pleasant track that honors one of CCM's greatest. Dozens of artists could spend years trying to do justice to all the demos and live recordings that never found their way onto Mullins' relatively small collection of full-length albums, and we can only conjecture about what was never documented or what never made it out of his head. Yet, his influence endures, and this song accomplishes its purpose of proving that very point.