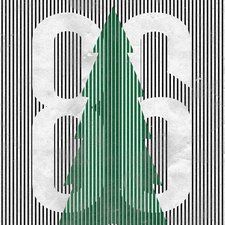 Fans of Project 86 have had a lot to rejoice over this year. A successfully funded Kickstarter campaign paved the way for the stellar August release, Wait for the Siren. As a cherry on top, P86 has released a two-song Christmas EP, ironically titled, The Midnight Clear Single. Andrew Schwab and company are no strangers to festive jams. In 2008, they packaged together five holiday-themed songs for the This Time of Year EP. The extremely dark, varied and peculiar collection was a real standout among the usual cookie-cutter Christmas releases that come out at the end of the year. With one successful holiday album, and considering the brilliance of Wait for the Siren, more tracks from the band are welcomed with open arms.

Overall, the EP is sufficient, giving a couple popular Christmas songs that distinct Project 86 style. It never quite reaches that level of This Time of Year, however. Andrew Schwab's vocals are consistently soft-spoken and really serve as a vehicle for the amazing instrumentation. At the end of both tracks, some screaming background vocals can be heard briefly, but the bulk of what you're going to hear is the low-key singing throughout.

"It Came Upon the Midnight Clear" is a rollercoaster musically. The song lulls you in with single synth notes, only to explode with some good old fashioned hard rock. The track continues the up and down rhythm, calming down during the lyrical sections and then drastically upping the ante. The guitar solo near the 2-minute mark is a real highlight. "Christmastime is Here" builds more gradually throughout the song. Some nice bells start things out, followed by Schwab's soft vocals. The musicianship that follows is impressive, but not quite as much fun as the previous track.

Even with the few complaints, the unique direction the band has chosen for both songs is admirable and sure to please fans of the band. However, it is far from accessable to the casual fan or someone just looking for some classic Christmas music. For that, I would recommend Hall & Oates or the Charlie Brown Christmas soundtrack. For those looking for something different this time of year, The Midnight Clear Single will be $2 well spent.